▶️ I am a beacon of knowledge blazing out across a black sea of ignorance.
此页面的（部分）内容需要被翻译。
你可以帮助我们来翻译此页面 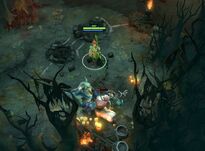 Enchantress in the middle of Jungling

Jungling (also referred to as bushing or neutral creeping) is when a player concentrates on killing Neutral Creeps during the game, usually for additional Gold or Experience. It refers to the Forests or Jungles between the lanes on either side where Neutral Creeps commonly spawn.

Neutral Creeps will spawn in camps in the jungles starting at 60 seconds into the game, and will respawn every 2 minutes of the game at 1-3-5-7.., assuming the camp has been cleared. To clear a camp, it must have no units inside it, including Neutral Creeps, Heroes and/or wards (note:lane creeps don't block camps). Creeps can be lured out of a camp, but will return after a period of time. Effective Junglers can use this to remove Creeps from a camp during the respawn time, so that a second wave appears while the first wave is still alive. This is called Creep Stacking. They can also trick creeps into following them into their lane where their Lane Creeps will engage. This is called Creep Pulling.

Jungling allows a Hero to earn Experience and Gold without being threatened by enemy Heroes, or having to split Experience gain with Allies. Additionally, Jungling makes last hitting significantly easier, and has greater returns in general compared to Laning. However, a Jungling Hero cannot be in lane, meaning that it effectively forces a team to have an additional solo lane. More solo lanes has its own advantages, but also leaves another Hero vulnerable, especially because the enemy team doesn't need to sacrifice as much to put pressure on them. Jungling is also difficult for newer players, and requires plenty of practice to work.

Summoner Heroes can Jungle very well because they don't have to attract the Creeps' attention in order to deal damage. Summoners refer to Heroes that can not only summon more units, such as Enigma or Nature's Prophet, but can also convert enemy units to their side, such as Chen or Enchantress. Summoners will often prioritize getting Mana regeneration over Health, due to high Mana costs associated with their abilities. Often, they'll purchase a Clarity or Sage's Mask early to keep their Mana up during the game.

Generally speaking, Summoners have an easy time Jungling because they just need to stand back while their units take care of the Creeps. Summoners that can convert Creeps are also capable of taking on Medium and Large Camps early on, while other Heroes should generally start with Small Camps.

Area of Effect Abilities make for more effective Jungling because they allow the jungler to attack multiple creeps at once, rather than concentrating on single targets. In Jungling, there are two kinds of AoE Heroes: Mana-independent and Mana-dependent.

Mana-independent Heroes require little or no Mana to use their AoE Abilities, such as Axe or Tidehunter. These Heroes should focus on increasing their Health and Health regeneration early by purchasing items that provide 力量 and Health bonuses. Mana-independent Heroes can make best use of Creep Stacking and Creep Pulling in order to increase the effectiveness of their abilities.

Heroes with Lifesteal or similar Abilities, such as Lifestealer, Legion Commander, or Wraith King, can jungle Mana-independently and with a reliable source of Health Regeneration. However, the amount of Lifesteal might not be sufficient in the early game and their Jungling speed is rather slow, making them more effective in the lane. Jungling with these Heroes might also force the user to distribute their ability points in an unusual or ineffective way.

These Heroes should focus on armor items such as Ring of Protection and items that increase their Jungling speed, such as Quelling Blade or Power Treads.

Creep Stacking is a process in which a Hero draws Neutral Creeps away from their camp so that they leave the area before a new wave of Creeps respawns. This allows players to significantly increase the number of Creeps in a particular Camp, allowing them to earn more Gold and Experience from a single Camp, or increasing the effectiveness of Creep Pulling. Stacking also grants the stacker 35% of the bounty if the Creep camp is cleared by allies. Creep Camps can be Stacked indefinitely, allowing there to be massive amounts of Creeps at one time.

Creep Pulling allows a Hero to "pull" a group of Neutral Creeps into their lane, causing them to attack their Lane Creeps. This is executed by getting the attention of a Creep Camp nearest to the lane and timing it with the spawns of the Lane Creeps. Pulling allows Heroes to avoid damage from Neutral Creeps and bring their abilities off Cooldown, while also denying friendly Creeps and preventing the enemy from earning Experience.

An enemy Jungler can be countered by frequent ganks and offensive Observer Wards to make ganks easier. Wards, when placed inside the spawn area of a Neutral Creep Camp, can also be used to prevent the Neutral Creeps from spawning to limit the enemy Jungler's options and income. A shadow blade or smoke can help you enter their jungle without being seen to gank.