Visage, the bound form of Necro'lic, is a ranged intelligence hero whose traits are unusual when compared to most intelligence heroes; he can be a ganker, tank, or nuker. Resilient and ruthless, Visage is a highly aggressive hero thanks to his great Strength gain and Gravekeeper's Cloak which allow him to soak up surprising amounts of damage. This is especially true from attacks mounted by Heroes who try to chip at his health with spells and burst damage without committing to a protracted engagement. This unholy gargoyle thrives in the midst of large battles, where the abundant pain and suffering in the air charges his Soul Assumption, allowing him to fire off huge bursts of magical damage in rapid succession. Additionally, Visage's proficiency with attacks is augmented by his ability to absorb the attack and movement speed of his foes with Grave Chill. Finally, his versatile ultimate, Familiars, is arguably one of the best scouting utilities in the game while also being excellent sources of damage and AoE disables. Utilizing his Familiars to their fullest requires constant split attention and good positioning to avoid feeding their large bounties to an enemy Hero. With a legion of ghostly gargoyles, incredible toughness, and fast attacks, Visage sows terror and agony, relentlessly hunting poor souls and leading them in the shackles of death to the gates of the Underscape.

Visage, the Bound Form of Necro'lic
▶️ "It is one thing to animate a corpse from beneath the ground. It is another to rip a soul from beyond the veil."
Lore:
Perched atop the entrance to the Narrow Maze sit the looming shapes of sneering gargoyles, the paths into the hereafter forever in their gaze. Beasts and birds, men and monsters, all creatures that die and choose to travel beyond must someday pass beneath their sight. For an untethered spirit, the decision to journey through the veil of death is irrevocable. When chance comes, and by craft or cunning some restless soul escapes their hells and heavens, it is the dreaded gargoyle Visage, the bound form of the eternal spirit Necro’lic, who is dispatched to reclaim them. Ruthless and efficient, unhindered by the principles of death and fatigue, Visage stalks its prey without mercy or end, willingly destroying all which may give shelter to the fugitive essence. That which flaunts the laws of the afterlife may never rest, for while it is true that the dead may be revived, it is only a matter of time before Visage finds and returns them to their proper place.
Voice:
Dempsey Pappion (Responses)

Applies self-buff while spell immune.
Cannot target spell immune enemies. Slow persists if debuff was placed before spell immunity and when not dispelled.

When blocked, Visage is not boosted either.
Modifiers

modifier_visage_grave_chill_buff: Dispellable with any dispel.

modifier_visage_grave_chill_debuff: Dispellable with any dispel.
The warmth of the sun is never felt in the dark cold of the Narrow Maze.

modifier_visage_soul_assumption: Undispellable. Persists death.
The collected souls of the dead reach out to bring another into their fold.

No Target)
Affects
Self
(

Magical
Visage generates a layered barrier that protects him from damage. If he receives damage from a player, one layer is removed, and takes time to recover.
Aura Radius: 1200
Max Layers: 4 (

Grants Visage the ability to cast Stone Form. Restores up to 35% of your health. Cooldown: 60. Manacost: 125.

Does not reduce damage or lose charges during Break. Lost charges still recharge normally.
Damage reduction on Familiars is only disabled when applying Break on Visage, not on the Familiar itself.
Modifiers

modifier_rooted: Dispellable with any dispel.

modifier_visage_summon_familiars_stone_form_buff: Dispellable with death only.

modifier_visage_summonfamiliars_timer: Dispellable with death only.

Ability
No Target
After a short delay, the nearest Familiar turns into stone and smashes into the ground, stunning and damaging all targets in the area. The Familiar becomes invulnerable, and will regain its health very rapidly. After 6 seconds, the Familiar will automatically leave Stone Form.
Cast Animation: 0+0

Silent as the Grave

modifier_visage_silent_as_the_grave: Dispellable with death only.

modifier_visage_silent_as_the_grave_bonus: Dispellable with any dispel. 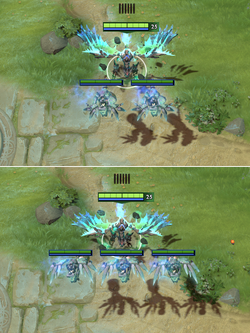 Ability
No Target
Conjures two blind Familiars to fight for Visage. Familiars possess the Stone Form ability, that allows them to turn into stone, stunning enemies upon landing. While in Stone Form, Familiars are invulnerable, and rapidly regenerate their health. Familiars grant high bounty when killed.
Cast Animation: 0+0
Number of Familiars: 2 (

Grants a new ability: Silent as the Grave.
Modifiers

modifier_visage_summon_familiars_damage_charge: Dispellable with death only.
Guardians of the Narrow Maze, Necro'lic's Familiars stand watch over his domain.

Ability
No Target
Affects
Enemies / Self
After a short delay, the Familiar turns into stone and smashes into the ground, stunning and damaging all targets in the area. The Familiar becomes invulnerable, and will regain its health very rapidly. After 6 seconds, the Familiar will automatically leave Stone Form.
Cast Animation: 0+0
Effect Radius: 350
Effect Delay: 0.55
Health Regen Bonus: 150/175/200
Damage: 60/100/140
Stun Duration: 1/1.25/1.5
Stone Form Duration: 6

modifier_rooted: Dispellable with any dispel.

modifier_visage_summon_familiars_stone_form_buff: Dispellable with death only.

modifier_visage_summonfamiliars_timer: Dispellable with death only.