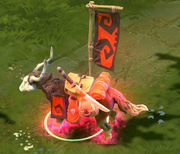 Unusual is a quality for equipment that has a special particle effect. Couriers are the only type of equipment that can be Unusual, and can only be obtained at a 1–2% chance through opening certain Treasures.

Unusual Couriers may have one of many different effects: a flurry of snow, bright beams of light, burning fire, or more. The effect is specified by which Ethereal Gem is placed inside it. An Unusual courier can be given a new effect by socketing another Ethereal Gem inside it, overwriting the old one.

Each effect can be one of many different colors, specified by a Prismatic Gem. Like Ethereal Gems, the color of an Unusual Courier can be changed by inserting a new Prismatic Gem.

Unusual Greevils are hatched from Greevil Eggs infused with Unusual Essence, and have their own unique effects, depending on the essences used. Greevils do not have Ethereal or Prismatic gems.