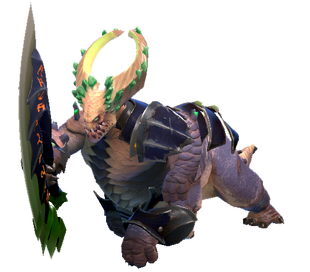 Underlord is a very strong team fight contributor. All of his four skills are very valuable in team fights, providing outstanding damage, area of effect rooting, defensive aura, and an uninterruptable escape. Underlord can snowball and end the game early even before hard carries obtain their key items.

However, there are several weakness to underlord. The most deadly weakness is his slow movement and mediocre health points, which make him easily die to enemy burst damage. This may cause underlod to be completely shut down at the start of the game. The second weakness is his zero-initiation. Although underlord provides most team fight value in almost all situation, his does not have the ability to start a fight. Therefore, underlord excels when his teammates can start the fight, and he will follow up with his aoe damage and aoe control.

Underlord is a very decent offline hero for his tean fights presence as well as the fact that he almost needs no item to function. With extra gold, underlord may want to purchase more aura items for the team, some kind of initiation such as

Rod of Atos, or more survivability (do not forget his deadly weakness to enemy burst damage!).