▶️ More pages for my Black Grimoire!
This article or section contains content that has been removed from the game or store, or has never been released. It exists solely for archival purposes.
This article is about the old deprecated Dota 2 Tutorial. For the new version, see New Player Objectives. 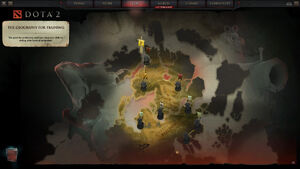 Tutorial missions on the World Map.

Training missions are tutorials that offer a single player experience in the form of a campaign. So far, its purpose is mainly for teaching the player about the basics of the game in a scripted scenario. Completing the training missions will grant players a free Gunslinger Set for

Sniper, as well as access to the Archronicus lore book.

This is a short video to acquaint new players with Dota 2.

Mechanics I: Davion, the Dragon Knight[edit]

Dragon Knight as the playable hero. The goal is to defeat an enemy hero,

Razor, with the help of

Keeper of the Light. This quest acts as a basic tutorial on controlling a hero. This tutorial teaches: 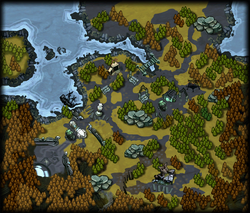 Sniper as the playable hero. The goal is to defeat an enemy hero,

This mission places the player as the hero

Sniper once again. The objective is to destroy the enemy's middle lane tower, while also defending your own tower from

Axe. The player is restricted to playing in the Mid-lane only, a wall appears when attempting to leave the combat area. This tutorial explains:

This quest gives the player the freedom to choose their own hero from a selection of 20 heroes, and pits them against an AI controlled bot from the same limited pool. The mission is the first and second mid lane towers. Players are free to move around the map, benefiting from Runes and Jungling. The shop is also unrestricted, allowing the player to purchase any items they choose. Players must complete this mission 10 times with different heroes in order to receive credit. This mission introduces:

This quest sends the player into a full 5v5 game with AI controlled Allies and Enemies, with a hero selection of the same limited 20 hero pool as previous missions. The objective is to destroy the opposing team's Ancient. Winning a single game will unlock the next mission, however, 5 matches with different heroes is required in order to complete the mission.

Play vs Humans: The War Begins[edit]

This final mission pits the player along with 4 other human players, against 5 human players Limited Heroes match. The goal is to destroy the enemy Ancient, while defending your own. Players must complete this mission 10 times with different heroes in order to receive credit.

This training mission teaches the user on how to last hit, and deny, effectively.

This is a bonus mission in which the player can choose any hero and select any lane. The goal is to get as many last hits in the space of 10 minutes, while an AI hero attempts to deny you. This mission also shows you the number of last hits you have gained, the number of creeps that have died, and your percentage of successful creep kills. Higher scores will earn trophies in the Gallery of Triumphs.

In this tutorial you're gonna be focused on attacking your enemies at short attack range, and doing damage to them from both Physical and Magical Damage with your spells, and you will also have to build your Agility increase items for more Attack Speed and Physical Damage.

In this tutorial you're gonna be focused on holding your durability during the fights, and using your Storm Hammer for stunning the enemy heroes to get the advantage point of the fight, and your Warcry to keep you and your allies more steady, and build a durable items such Black King Bar and Assault Cuirass for holding you at the fights for much longer.