The International 2018 was the eight iteration of Dota 2's flagship annual championship. Hosted by Valve Corporation, it took place at the Rogers Arena in Vancouver, British Columbia, being the first to be celebrated outside of the United States. The tournament began on 14 June 2018 with the Open Qualifiers and closed on 25 August 2018 with the Grand Final, where underdog team

The International 2018 became the first time a non-Chinese team had won the tournament in an even year, breaking the tradition of Western and Eastern teams alternating the championship which had been maintained for the previous seven years. The tournament also saw the first time a team went from the Open Qualifiers to TI champions, as OG lost their spot after being forced into a late-minute roster change. For a second consecutive year, champions

Trust of the Benefactor 2018

Treasure of the Crimson Witness 2018

In the All-Star match of 2018, two teams, Team BurNIng and Team rOtk, faced each other in a best of one, playing Mutation Mode. The teams' players were decided by Compendium owners, who were able to vote for 5 players for each team. Just like in the previous year, there was no secrecy between the teams. The playing booths were completely open, so that both teams could hear each other, the casters and the crowd.

On the previous day, both teams were gathered to draft their heroes and mutations before-hand. Unlike in regular Mutation Mode, the teams were allowed to choose three mutations, which would then only affect their team.

In addition to the chosen modifiers, the following modifications were active for both teams:

The Main Event is a double-elimination tournament with the top four teams from each group starting off in the Upper Bracket whilst those who received 5th to 8th place starting off in the Lower (The teams that received 9th place in each group were eliminated). Most matches in the tournament are best-of-three, with the only exceptions being the matches in the 1st round of the Lower Bracket being best-of-one and the Grand Finals being best-of-five. 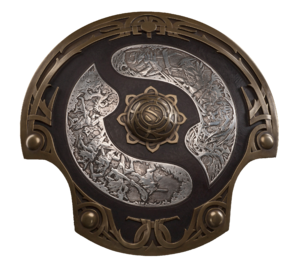 As with previous Internationals, the winning team is also awarded the Aegis of Champions.