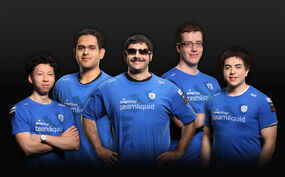 FLUFFNSTUFF, Bulba, ixmike88, TC, and Korok at The International 2013.

Team Liquid (Liquid) is a professional gaming organization formed in 2000 and based in the Netherlands.

The team's original incarnation has roots in a North American lineup headed by FLUFFNSTUFF called Team FIRE, that went on to represent compLexity Gaming at The International 2012. Following an early knockout, the coL squad disbanded with TC, ixmike88, and FLUFFNSTUFF moving over to Liquid and joining BuLba, who competed at TI2 with Evil Geniuses, and Korok, formerly of Quantic Gaming.

In 2013 the team established itself as one of the premier North American organizations with this roster, placing highly in events such as the Raidcall D2L, The Defense Season 3, The Premier League Season 4, and the American Dota League in addition to securing an invite to The International 2013. After a rocky start they fell into the lower half of the bracket by a thin margin, which saw them defeat MUFC and then had one of their defining moments in a stellar performance against LGD.cn, knocking the Chinese behemoth out of the event. A loss to the defending champions Invictus Gaming saw them out in 7-8th place.

After the event the roster changed once more, with ixmike88 going inactive to focus on ixdl, and Korok leaving for school.qojqva of mousesports and Waytosexy of Dignitas eventually filled the ranks. After a strong start in online leagues and group stages, the team had major stumbles at both Fall LAN events, falling early at both MLG Columbus and DreamLeague. By early Winter, the team started to falter in its online play as well, with the frustration boiling over and being shown by FLUFFNSTUFF on his TL.net blog.[1] The blog resulted in an ultimatum for FLUFF: win as captain, or be removed from the team.[2] The team failed to improve, and Liquid soon parted ways with Fluff.[3] After trialing a few players, including Sneyking, DeMoN was added to the roster to take his place.

Despite some early promise, the team still struggled, falling to Evil Geniuses and North American Rejects in straight sets, and in doing so, failing to qualify for The Summit. Shortly after, TL fell to Evil Geniuses in the final stages of the ESL One Frankfurt qualfiers. Due to the teams recent struggles, they were not invited as a direct seed to The International 2014, and instead had to fight through another set of qualifiers. Liquid ended the group stage tied for first, setting up a winners finals against NAR, a team they had yet to ever take a match off. Liquid fell 0-2, setting up a match against ex-liquid players ixmike and FLUFF on their new team Sneaky Nyx Assassins. After a close game one, Liquid appeared to have captured the momentum and convincingly took game two, advancing them to play NAR in the finals. The finals ended up being much more back and forth than any other set between the teams, but after the delayed final game and Liquid's eventual defeat, they were forced to settle with a Play-In position for TI4.

Following up their disappointing TI4 qualifiers, the team continued to experiment with juggling their roles while playing in the GEST - The Challenge 4. Demon moved to the carry or offlane, with TC moving to support. The team showed some early success against we Try and Relax, but stumbled again when they hit NAR in the semi finals. Liquid capped off the month with a disappointing group stage exit in the D2L Western Challenge.

In early June, the team did manage a small bright spot, with their second place finish in the second season of the American Dota League Season 2, falling to mousesports 1-3 in the finals. The team also shuffled positions slightly again, with BuLba moving to support, and DeMoN to the offlane. The tournament marked Team Liquid's last official matches before fighting for the wildcard spot in Seattle in a month and a half's time.

Although Liquid earned a trip to Seattle, they still needed four wins to make their way into the main event of the tournament. First up was the favorite CIS, coming out of China, and led by Black^. Heavily favoring the picks of Skywrath Mage for BuLba and Tidehunter for DeMoN, Liquid crushed CIS in two straight games, with a combined kill score of 49-12. This would advance them forward to face MVP Phoenix, who had won their series against Virtus.pro on the other side of the bracket. After a close first match in which TL came out on top, Liquid were able to ride the momentum and close out the series in convincing fashion in the second match, qualifying for the main event without losing a game.

At the main event, Liquid stumbled out the of the blocks with another loss to nemesis Na`Vi.US (ex-NAR), but bounced back in a major way with wins over favorites Newbee, Evil Geniuses and Team DK in Day 1. In Day 2, TL continued to rack up wins, beating Empire and Fnatic, but lost three, to Cloud9, LGD, and most notably, Arrow Gaming, a loss that would haunt them in the next stage. In Day 3, Liquid managed to defeat the previous two TI winners, Invictus Gaming and Alliance, with an additional win over Titan, but also dropped two matches, one to Natus Vincere, and one to Vici Gaming. Liquid only had one game on Day 4, with a win guaranteeing them at least top 6 in the group stage, and top 8 overall. Unfortunately, mousesports went on to defeat them, and Liquid finished in a 4 way tie for 5th spot, but fell to 7th after accounting for the tiebreaking rules.

Their 7th place in group put them up against LGD Gaming in the next round, the team Liquid upset in the previous year. They would face off again in an elimination match, loser walking home with ~50,000USD, and the winner guaranteed at least ten times that. This year was different from the previous though, and LGD outclassed Liquid, convincingly taking two straight games, and knocking Liquid out of the tournament in 9th-10th place.

The post-TI shuffle was not kind to Liquid. It was announced DeMoN had departed a couple weeks after the event, quickly followed up by waytosexy. About a week later, Team Tinker appeared, featuring both BuLba and qojqva. Many hoped this was a trial for a new roster for Liquid, but after less than a month, it was revealed that the two had left the Liquid organization. Being the last man standing, TC left Liquid in early October, leaving Liquid without a Dota roster for the first time in two years.

On October 9th, 2015, Team Liquid announced their re-entry into the Dota 2 scene with their signing of 5Jungz.[4]

Team Liquid's success continued on to the Shanghai Major in March 2016, where the team was able to reach second place, falling to Team Secret in the grand finals. Following their silver medal was another at ESL One Manila, where they lost to Wings Gaming the Finals. Finally taking home a win at a large LAN Team Liquid won EPICENTER in Moscow over Newbee 3-2. Returning to Manila for the Manila Major Liquid was again defeated in the Grand finals, this time by OG. After the two Majors, Team Liquid was among the teams that were directly invited to The International 2016.