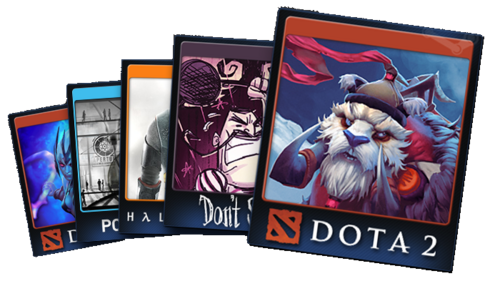 Steam Trading Cards are virtual cards earned by playing games on Steam. Sets of cards can be turned into game badges and tradable Steam community items.

Crafting badges will always grant the player a Dota 2 Profile Background and an Emoticon, with a chance of obtaining a Coupon. It will also contribute 100 XP towards your Steam Level, which will add features to your Steam Profile display.

Profile Backgrounds are used to decorate your Steam Profile. They can be sold and bought on the Market, or traded with other players.

Emoticons can be used in chats and comments on Steam. They cannot be used in the Dota 2 client. They can be sold and bought on the Market, or traded with other players.

Coupons can be used to purchase another Steam game at a discount. Discounts range from 15% to 90%. Coupons will expire after a predetermined time.