Kardel Sharpeye, the Sniper, is a ranged agility hero who excels at dealing moderate to heavy damage from an incredible range. With no escape mechanism, poor mobility, and a low health pool, Sniper is exceptionally frail at all stages of the game and vulnerable to enemies who confront him head-on. However, his abilities provide him both the means to keep his distance and systematically destroy his enemies from afar. Shrapnel is a potent, high-cast range zoning ability that provides vision for Sniper while slowing and damaging enemies in its area of effect; with up to 3 charges on the ability, Sniper can completely close off any viable routes for his opponents to approach or escape. Headshot supplements Sniper's right-click damage and briefly pushes the enemy away, which can be quite crippling for approaching enemies since it has a high rate of occurring. His third ability, Take Aim, gives him the largest attack range of any hero in the game, allowing him to deal high DPS from a safe distance while also giving him the ability to never miss and proc more Headshots, ensuring the enemy cannot contest him from afar. Finally, Assassinate is a strong finishing and harassing ability, dealing hefty damage to an enemy from an enormous distance after a brief aiming period. Sniper is heavily item-dependent, relying on means to increase his survivability as well as his damage output as the game progresses. Skilled players will find that positioning is the most important thing to keep in mind when playing both as him or against him.

Kardel Sharpeye, the Sniper
▶️ "Now that's what I call stopping power."
Lore:
Kardel Sharpeye was born deep in the mountains of Knollen where, since time immemorial, Keen Folk have survived by hunting the strange, cliff-dwelling steepstalkers above their village, shooting them from a distance and collecting the carcasses where they fell. Sharpeye was among the best of these strange mountain keens for whom projectile weapons are but another appendage, and to shoot is as natural as to touch.

On his day of summoning, when he was to gain full standing in his village, Sharpeye took the ancient test: a single shot from the valley floor to strike a beast down from the cliffs. To miss was to be dishonored. With his entire village standing vigil, Sharpeye took his shot. A steepstalker fell; the crowd cheered. But when the carcass was collected, the village grew silent, for the elders found that the bullet had pierced its glittering central eye then fallen to be clenched in the steepstalker's mandibles. This ominous sign was the literal opening of a dark prophecy, foretelling both greatness and exile for the gunman who made such a shot. Sharpeye the Sniper was thus, by his own skill, condemned to make his way apart from his people—and unwelcome back among them until he has fulfilled the remainder of the prophecy by attaining legendary stature on a field of battle.
Voice:
Gary Schwartz (Responses)

Slow persists and attempts to damage if debuff was placed before spell immunity.
Modifiers

modifier_sniper_headshot_slow: Dispellable with any dispel.

modifier_knockback: Dispellable with strong dispels.
Taking potshots at steepstalkers in his childhood has been thoroughly refined into perfect leads on enemy combatants.

modifier_sniper_take_aim_bonus: Dispellable with any dispel.
Kardel always takes it upon himself to stay as far from harm as he can while still performing his role - taking perfect aim.

modifier_knockback: Dispellable with any dispel.

modifier_sniper_concussive_grenade_slow: Dispellable with any dispel. 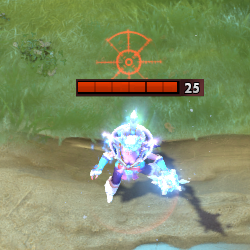 Visual indicator above the target.
Assassinate

Causes Assassinate to fire quicker and disable the enemy target.

Cannot be disjointed with invisibility without true sight immunity, due to the debuff being placed on cast begin.
Modifiers

modifier_sniper_assassinate: Dispellable with death only.

modifier_stunned: Dispellable with strong dispels.
In order to fulfill the prophecy and return to his home town, Kardel must make another shot as perfect as the one on the day of his ancient test.

Take Aim
Can be activated to double the attack range bonus for 1 attack.

Take Aim
Can be activated to provided True Strike and increased Headshot proc chance for a short duration. Slows Sniper while active.