Rubick, the Grand Magus, is a ranged intelligence hero best known for his ability to copy the spells of his enemies and use them as his own. Although he is mostly played as a support and is extremely fragile the entire length of the game, he can still prove to be one of the most influential heroes if he utilizes good positioning and well-timed usage of his ultimate, Spell Steal. Spell Steal allows Rubick to cast an enemy hero's most recently used spell, giving him supreme versatility throughout the game. By stealing the right abilities, the Grand Magus can aid himself and allies by casting crippling disables, applying curses, unleashing powerful nukes, disorienting the enemy team, supporting his allies with buffs, escaping from rough situations, or even enhancing his own physical attacks. His other abilities are just as worthy of a Magus: Telekinesis lets Rubick magically lift an enemy into the air, rendering the target helpless and vulnerable, before hurling the lifted enemy to the ground up to a short distance away and stunning nearby foes on impact. Fade Bolt blasts enemies with a stream of arcane energy which bounces to all enemies nearby, dealing damage and reducing their attack damage. Arcane Supremacy is a passive ability, which increases cast range and amplifies the spell damage of Rubick's stolen spells. Rubick's versatile ability-set and his infamous Spell Steal make him a flexible and powerful hero that can work in any lineup although he does suffer from long cooldowns and the surfacing predictability of his ultimate.

Rubick, the Grand Magus
▶️ "No sorcery lies beyond my grasp."
Lore:
Any mage can cast a spell or two, and a few may even study long enough to become a wizard, but only the most talented are allowed to be recognized as a Magus. Yet as with any sorcerer's circle, a sense of community has never guaranteed competitive courtesy.

Already a renowned duelist and scholar of the grander world of sorcery, it had never occurred to Rubick that he might perhaps be Magus material until he was in the midst of his seventh assassination attempt. As he casually tossed the twelfth of a string of would-be killers from a high balcony, it dawned on him how utterly unimaginative the attempts on his life had become. Where once the interruption of a fingersnap or firehand might have put a cheerful spring in his step, it had all become so very predictable. He craved greater competition. Therefore, donning his combat mask, he did what any wizard seeking to ascend the ranks would do: he announced his intention to kill a Magus.

Rubick quickly discovered that to threaten one Magus is to threaten them all, and they fell upon him in force. Each antagonist's spell was an unstoppable torrent of energy, and every attack a calculated killing blow. But very soon something occurred that Rubick's foes found unexpected: their arts appeared to turn against them. Inside the magic maelstrom, Rubick chuckled, subtly reading and replicating the powers of one in order to cast it against another, sowing chaos among those who had allied against him. Accusations of betrayal began to fly, and soon the sorcerers turned one upon another without suspecting who was behind their undoing.

When the battle finally drew to a close, all were singed and frozen, soaked and cut and pierced. More than one lay dead by an ally's craft. Rubick stood apart, sore but delighted in the week's festivities. None had the strength to argue when he presented his petition of assumption to the Hidden Council, and the Insubstantial Eleven agreed as one to grant him the title of Grand Magus.
Voice:
Barry Dennen (†) (Responses)

Allows you to target yourself or allies with Telekinesis. Throw range is 85% longer and cooldown is reduced by 30% when targeting allies. Throw delay reduced to 0.5 seconds.

Lift persists if debuff was placed before spell immunity and when not dispelled.

modifier_telekinesis_stun: Dispellable with strong dispels.
Even the Grandest Magus may use his powers for enjoyment.

Attack damage reduction persists if debuff was placed before spell immunity and when not dispelled.

modifier_rubick_fade_bolt_buff: Dispellable with any dispel.

modifier_rubick_fade_bolt_debuff: Dispellable with any dispel.
Rubick's favorite spell for dispatching would-be assassins is a rather simple conjuration.

modifier_rubick_arcane_supremacy: Undispellable. Persists death.
Not every magus can be a Grand Magus... 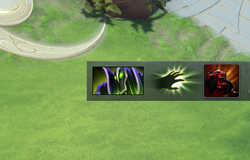 A popup appears on the right side of the screen whenever an allied Rubick steals an ability.
Spell Steal

Ability
Target Unit
Affects
Enemy Heroes / Self
Rubick studies the trace magical essence of one enemy hero, learning the secrets of the last spell the hero cast. Rubick can use this spell as his own for several minutes or until he dies.
Cast Animation: 0.1+0.93
Cast Range: 1000 (

Decreases cooldown, increases cast range and upgrades the spell to the Scepter level.

The debuff duration amplification is not disabled by Break.
Modifiers

modifier_rubick_spell_steal: Dispellable with death only.
...but even their lesser magics can be a source of much utility.