Pudge, the Butcher, is a melee strength hero feared for his incredible ganking prowess and risky, yet potentially rewarding playstyle.

Pudge is potentially one of the strongest gankers and disablers in the entire game, with his combo of three active abilities proving more than sufficient to kill fragile enemy heroes in the early and mid-game. His signature ability, Meat Hook, is a grapple that is thrown out in a straight line; if it snags a target, it will drag them back to Pudge, dealing enormous damage to it if it was an enemy. Although it can be difficult to land and often requires a good read on the enemy's movements, it is a very powerful ganking and initiation spell due to its ability to displace enemies, and also has the utility of being able to save an endangered ally. He can then follow up with his ultimate, Dismember, a channeled disable that deals further damage to the target over a few seconds and increases in lethality the more strength Pudge has, while also healing Pudge for its duration. During this period, he can activate Rot to deal even more damage while he is consuming his foe, and use it to slow and finish them off if they survive the initial assault. Rot is also a very potent ability even from the start of the game, as it can slow an enemy to a crawl and be used indefinitely as long as Pudge keeps pace with the enemy, making Pudge a strong roamer. To supplement his killing power is Flesh Heap. The scariest aspect of Flesh Heap though, is that it provides him with a permanent strength bonus with every kill that he participates in, making him harder to kill and increasing the damage of Dismember as the game goes on. A skilled Pudge player is feared by many, as he can quickly snowball out of control, cripple the enemy team, and become an unstoppable behemoth of rotting flesh.

Pudge, the Butcher
▶️ "When I'm through with these vermin, they'll be fit for a pie!"
Lore:
In the Fields of Endless Carnage, far to the south of Quoidge, a corpulent figure works tirelessly through the night--dismembering, disembowelling, piling up the limbs and viscera of the fallen that the battlefield might be clear by dawn. In this cursed realm, nothing can decay or decompose; no corpse may ever return to the earth from which it sprang, no matter how deep you dig the grave. Flocked by carrion birds who need him to cut their meals into beak-sized chunks, Pudge the Butcher hones his skills with blades that grow sharper the longer he uses them. Swish, swish, thunk. Flesh falls from the bone; tendons and ligaments part like wet paper. And while he always had a taste for the butchery, over the ages, Pudge has developed a taste for its byproduct as well. Starting with a gobbet of muscle here, a sip of blood there...before long he was thrusting his jaws deep into the toughest of torsos, like a dog gnawing at rags. Even those who are beyond fearing the Reaper, fear the Butcher.
Voice:
John Patrick Lowrie (Responses)

Ability
Target Point
Affects
Enemies / Allies
Damage
Pure
Launches a bloody hook toward a unit or location. The hook will snag the first unit it encounters, dragging the unit back to Pudge and dealing damage if it is an enemy.
Cast Animation: 0.3+0.59
Cast Range: 1300
Max Travel Distance: 1300
Hook Search Radius: 100
Damage: 150/220/290/360 (

modifier_followthrough: Dispellable with death only.

modifier_pudge_meat_hook: Dispellable with death only.
The Butcher's hook is a symbolic nightmare, its curved blade a frightening reminder of his slaughterous intent.

Slow persists and attempts to damage if debuff was placed before spell immunity.
Modifiers

modifier_pudge_rot: Dispellable with death only.
A foul odor precedes a toxic, choking gas, emanating from the Butcher's putrid, ever-swelling mass.

Ability
Passive
Affects
Self
Gives Pudge increased magic resistance, as well as bonus strength that increases each time Pudge kills an enemy Hero or it dies in his vicinity. Flesh Heap is retroactive, meaning it can gain charges before it is skilled, which then become active.
Enemy Death Radius: 450
Kill Radius: 1600
Magic Resistance Bonus: 12%/14%/16%/18%
Strength Bonus per Death: 1.5/2/2.5/3 (

modifier_pudge_flesh_heap: Dispellable with death only.
The Butcher gives new meaning to the words 'meat shield'.

Ability
No Target
Ejects the swallowed allied hero inside of you.
Cast Animation: 0+0 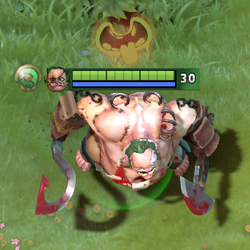 Visual indicator above Pudge when devouring an ally.
Dismember

Allows targeting an ally to swallow them and heal them for 6% of their max health per second. Reduces cooldown by 10 seconds.
Modifiers

modifier_pudge_swallow: Dispellable with death only.

modifier_pudge_swallow_effect: Dispellable with death only.

modifier_pudge_swallow_hide: Dispellable with death only.

modifier_pudge_dismember_pull: Dispellable with strong dispels.
'When I'm through with these vermin, they'll be fit for a pie!'