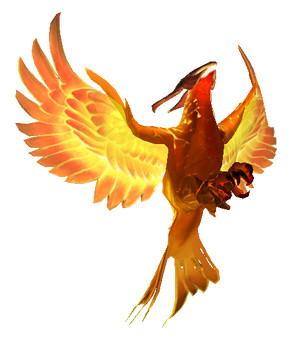 Phoenix is best played as an initiator, as it can deal heavy damage per second over time with its abilities. Fire Spirits should be the first maxed-out ability, acting as a pseudo-disable that can fool the enemy into thinking they can fight back. Adding more levels to Icarus Dive applies more DPS to an enemy when harassing during the laning phase or when initiating. Avoid leveling Sun Ray early on as you require the mana for Fire Spirits and Supernova, and Phoenix's mana pool is not very large early game. Supernova can turn the tide of battle if used properly. Quick reaction time, proper positioning, and an aggressive, risk-taking mindset are important, so that Phoenix can land all its debuffs on as many of the enemies as possible prior to using the ultimate, dealing immense magical damage in a large area. Items that synergize with Supernova well (such as magic amplification and AoE effects) are best gotten for Phoenix players who go by this playstyle.

Phoenix's abilities are also very good at disorienting the enemy team and keeping your team alive in teamfights. Instead of focusing on initiating with Supernova, it is reserved only as a follow-up for its team's other abilities, preferably area disables such as

Ravage. Sun Ray will be Phoenix's staple ability, as its scaling and gradually increasing damage can easily whittle an enemy's health down, and even heal allies at the same time. Fire Spirits should be the next priority as it is still important in keeping the Supernova alive, while Icarus Dive only increases its damage with levels, meaning it should be maxed last. Positioning is still key, so that Sun Ray may be in an angle that can heal and damage simultaneously. Items to go for in this playstyle are preferably those that aid in the survival of your own team, such as auras like

Pipe of Insight or

Guardian Greaves. However, if

Aghanim's Scepter becomes an option, Sun's survivability should be top priority to prevent having two deaths at once in your own team, so consider

Shiva's Guard as possible next items.