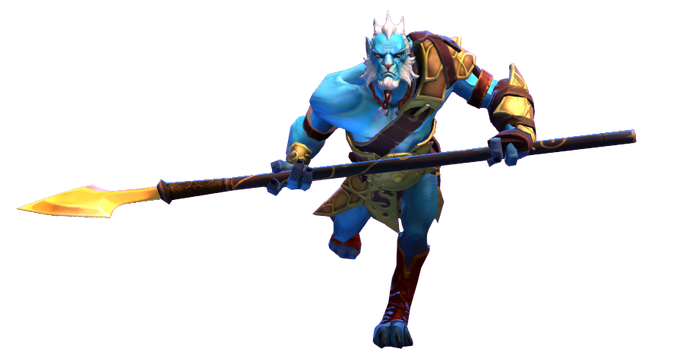 Phantom Lancer is traditionally played as the farming core in the safelane, harassing opponents with Spirit Lance, but mostly focusing on getting last hits and keeping his lane static close to his tier 1 tower. His great base damage, base agility and attack animation makes it easy to control the lane, denying at will without missing any last hits.

Every Phantom Lancer build should probably include an early

Magic Stick entirely versus a weak offlane, keep his

Boots of Speed and immediately rush a

Thanks to his great base damage and attack animation, Phantom Lancer can easily get last hits in the middle lane. Get an early level of Phantom Rush to make it even easier to finish off that ranged creep, or to start harassing the enemy mid-laner.

Start off with an

Enchanted Mango to give you some passive health sustain which will allow you to trade hits better versus the opponent, and rush a

Bottle to keep your mana up while you spam Spirit Lance. A mid Phantom Lancer may want a couple of items to help tank him up before getting his

Diffusal Blade, such as an upgraded

This style could be identical to the generic Phantom Lancer, but it assumes you're against heavy AoE line-ups against which you're sure to die from for most of the game. Many people rightfully pick

Bristleback to counter Phantom Lancer. In these cases, upgrade your

Magic Stick to a full

For survival, you can rush a

Vanguard, and since the goal is to split-push and not fight, quickly upgrade your boots into

Diffusal Blade could come as late as a fifth or sixth item, after

Vanguard, and another tanky item.