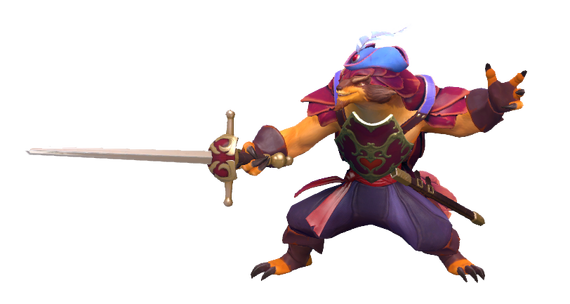 Pangolier's strength lies in his early power spike when he hits level six. His ultimate grants spell immunity and hits enemies several times, making him a dangerous ganker and initiator, while Swashbuckle and Shield Crash allow him to quickly clear creep waves and catch up on farm. Shield Crash gives him insane amounts of survivability that allows him to safely disrupt team fights, while Swashbuckle lets him catch up on fleeing targets to finish them off.

His flexible item choices make him a great hero to have on any team. He can choose to buy sustaining items like

Guardian Greaves to help his team in fights. Or, he may fancy some more disables with

Skull Basher. When the situation calls for, Pangolier may even consider offensive items like

Monkey King Bar to take advantage of the mobility and sustainability from Swashbuckle and Shield Crash to deal reliable damage.

As a carry, Pangolier can choose to go full glass cannon build, featuring 2 or even 3

Javelins that dish out burst magical damage on top of Swashbuckle and Shield Crash, capable of melting almost all heroes in the early to mid game. With just those items, Pangolier also farms and pushes fast because he can usually clear creep waves with just one Swashbuckle.