Meepo, the Geomancer
"If you ask me, life is all about who you know and what you can find. When you live up in the Riftshadow Ruins, just finding food can be tough. So you need to cut corners, you need to scrounge, you need to know your strengths. Some of the beasts up there can kill you, so you need a way to trap the weak and duck the strong. On the upside, the ruins have history, and history is worth a lot to some people. There used to be a palace there, where they had all these dark rituals. Bad stuff. If you survived the ceremony, they would shatter a crystal and split your soul into pieces. They made great art though! Sculptures and such. Let me tell you: sometimes you stumble onto some of those old carvings. Take a pack full of those to town and sell them, then get yourself food for a few weeks. If luck is really on your side, you might find a Riftshadow crystal. Get it appraised and start asking around. Someone always knows some crazy fool looking for this kind of thing. If all else fails, sell it to a Magus the next time one's in town. They love that stuff. Still, whatever you do, be careful handling those crystals. You do not want one to go off on you. It really hurts."

Meepo once explored the Bone Ruins, where he obtained the key to the entrance arch, badly damaged by explosives.[13] Inside, he found bandits, which he evicted, and took one of their bandanas as a souvenir.[14] He also found the skull of a large bird-like creature, which he now uses to protect his right shoulder.[15] 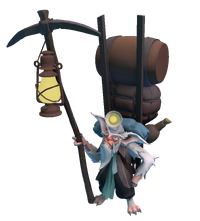 A clone of Meepo got separated and is now lost in The Underhollow. He is laden with mining equipment, and may have been looking for the rare Roshefort cheese. He has also grown a beard.[16]

Meepo is familiar with the Jasper Circle, and apparently owes them a great unpaid debt.[17] Because of this, he is hunted by Lorlin Lasan, who promises an ominous fate for Meepo once he finds him.[18] He is also good friends with Mireska, a former candidate for the Jasper Circle, who goes drinking and gambling with him, and warns him about the Jasper Circle's plans.[19]