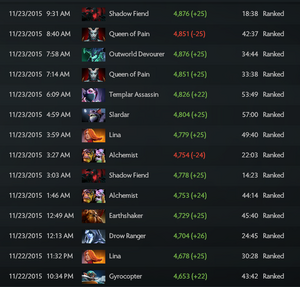 A player's match history, showing changes in MMR after each game.

Matchmaking Rating, or MMR is a value that determines the skill level of each player. This value is used in matchmaking. Winning increases a player's MMR, while losing decreases it.

Ranked Matchmaking allows players to earn seasonal ranking medals based on their MMR. Players with the highest ratings are listed on the world Leaderboards.

In December of 2013, Valve gave the following MMR distribution for solo unranked matchmaking across the entire player base.[2] It is unknown how much these figures have changed since 2013.

Percentile indicates the percentage of players who are lower than the corresponding MMR. For example, a player with 3200 MMR would be more skilled than 90% of the total population.

Subsequent analysis of public player profiles collected by OpenDota shows a higher average MMR of approximately 3100. This figure is assumed to be skewed upwards, as it is generally believed that newer and less skilled players are less likely to display their MMR publicly, and therefore are not considered in the data analysis.

Uncertainty is the standard deviation of a player's MMR.

In general, parties receive bonus MMR when searching for matches. This is meant to compensate for superior party coordination, as well as partying with highly skilled members.