Mars, the First Son of Heaven, is an aggressive melee strength hero who controls the battlefield with numerous knockbacks and impassable terrain. Equipped with a large shield, his Bulwark passively blocks attacks from the front and sides, making him a very durable fighter in most situations. The same shield allows him to smash enemies and knock them back, dealing critical damage that ignores all evasion. The Spear of Mars can be thrown at long range, piercing enemies to push them back, and stunning them upon contact with trees or terrain. Mars' most potent ability creates an Arena Of Blood, a circular zone where no enemy can exit or enter, as well as blocking enemy attacks from the outside. Used correctly, the Arena Of Blood can decisively split and cut off enemies from support during teamfights, making Mars a valuable asset to his team, as well as a highly dangerous opponent.

Mars, the First Son of Heaven
▶️ "To those behind, rally! To those ahead, kneel."
Lore:
Mars, first son of heaven, spent a long existence waging endless war, and saw countless more crusades waged beneath the banner of his old name. Wars of conquest and of vengeance. Just and unjust... Always cruel. So much like his father, Mars indulged his basest impulses--with inclinations much more monstrous than those of Zeus--and he inflicted suffering untold.

But as the epochs vanished behind him, the selfish ways of his father--the ways of many amongst his godly kin, they who judged him despicable--eventually began to ring hollow. War for its own sake was no longer enough to satisfy his desires. For the first time in his ageless days, the god of war began to question to what ends he swung his glorious spear.

As the Fates would have it, his solution came easily: he must wage war for a larger purpose, and inspire more than mere savagery and sorrow at the sight of his crest. He must at last lay claim to the mantle of leadership that is his birthright, for the time has come to burn down the pantheon of the old age and build a just new empire atop the ashes of his kin. Only then might he find satisfaction, and make the glory of Mars evident to all.
Voice:
Trevor Devall (Responses)

Ability
Target Point
Affects
Enemies
Damage
Magical
Mars throws his legendary Spear with deadly precision, damaging each enemy unit it strikes. The first enemy hero it hits is skewered on the spear, pushing it back. If a skewered hero hits a tree, building, or cliff, they will be impaled to it and stunned.
Cast Animation: 0.25+1.03
Cast Range: Global
Max Travel Distance: 900/1000/1100/1200
Spear Collision Size: 125
Spear Damage: 100/175/250/325 (

Spear of Mars impales up to two units and leaves a fire trail behind for 10 seconds. Deals 35 damage per second and slows by 20%. Debuff lingers for 2 seconds.
Modifiers

modifier_mars_spear_impale: Dispellable with death only.

modifier_knockback: Dispellable with any dispel.

modifier_special_mars_spear_burning_trail_burn: Dispellable with any dispel.
The legendary Spear of Mars still glows with the heat of the forge god's fires. 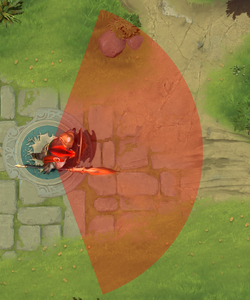 Ability
Target Point
Affects
Enemies
Damage
Instant Attack
Mars smashes enemies in front of him with his shield, knocking them back and damaging them with a critical hit based on his attack. Bonus damage is added when hitting heroes. Has True Strike.
Cast Animation: 0.2+1.07
Cast Range: 500
Radius: 500
Circle Sector Angle: 140°
Critical Damage: 150%/190%/230%/270% (

modifier_knockack: Dispellable with any dispel.

modifier_mars_gods_rebuke_slow: Dispellable with any dispel.
There isn't a warrior alive who can stand unmoved by the sting of Mars' rebuke.

Instant Attack
Mars wields his massive shield to block a portion of each physical attack when hit from the front or sides.

Can be toggled, removing Mars's ability to attack, and locking the direction he is facing. When active, reduces movement speed and re-directs 70% of the attack projectiles aimed at Mars's allies towards Mars instead.
Front Angle: 140°
Side Angle: 240°
Front Damage Reduction: 40%/50%/60%/70%
Side Damage Reduction: 20%/25%/30%/35%
Active Projectile Redirect Chance: 70%
Active Projectile Redirect Range: 800
Active Self Move Speed Slow: 20%

Creates invulnerable soldiers around Mars' front while Bulwark is toggled on. Soldiers move alongside Mars, dealing his full damage +75 and applying procs. Attacks slow enemies by 30% for 1 second. An enemy can only be attacked by one soldier at a time.

The attacks of the soldiers pierces spell immunity.

Break does not disable the projectile redirect (

or the soldiers) when toggled on, but does disable the damage reduction.
Modifiers

modifier_mars_bulwark_active: Dispellable with death only.

modifier_mars_bulwark_soldier_thinker: Dispellable with death only.

modifier_mars_scepter_damage_tracker: Dispellable with death only.

modifier_mars_scepter_damage_slow: Dispellable with any dispel.
Only the very foolish dare to fight fair with the god of war.

modifier_mars_arena_of_blood_spear: Dispellable with any dispel.
The long-dead members of the Ash Legion, assembled from the finest warriors to ever test the might of Mars, still revel in the thrill of combat, gladly beholden to the hand that fell them for as long as he so commands.