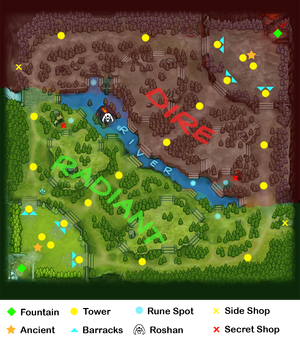 Labelled minimap as of version 7.20 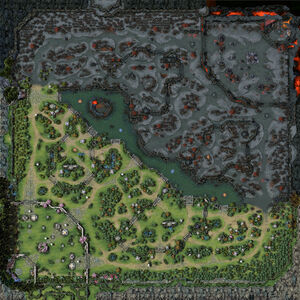 Overhead view of the game map as of version 7.27
This article is about the in-game map. For locations in Dota 2 lore, see Category:World.

The Map is the playing field for all Dota 2 matches. It is comprised of two sides, one for the

Radiant faction, and one for the

Dire faction. To win, players must destroy the opposing side's Ancient, an important building at the center of each team's base. The map is represented in the interface by the minimap.

Each faction occupies a diagonal half of the map, separated in the middle by the river. The

Radiant is based at the lower left corner of the map, while the

Dire is based at the upper right corner. The Ancients are located inside strongholds at the heart of each faction's territory.

The map is segmented into three different lanes, the top, the bottom, and the middle lane. Each one of these lanes leads to the other team's base, guarded by towers along the way. During the early laning phase of the game, most gameplay is centered around the lanes.

The bottom lane for the

Radiant, and the top lane for the

Dire, are considered safe lanes. Creeps meet each other close to the towers, which provide greater protection from enemies. These lanes are recommended for beginners, as they provide some added protection against ganking.

The River separates the two factional sides of the map. It is surrounded by high ground, which blocks players' vision on both sides. The river interacts with 2 spells in the game:

Guardian Sprint (amplifies movement speed bonus while in the river and, if

Spots of the river can be created manually by

Aghanim's Scepter. In this case, when

Slithereen Crush is cast, a puddle of water is created around

Slardar, which is considered river.

From the start of the game onward, Bounty Runes will spawn at four different locations on the map, two of which on the River, and the other two on the Radiant and Dire side each.

At 2 minute mark and 4 minute mark, only one type of Power-up Rune will spawn randomly at both two points in the river:

From the 6 minute mark onward, other Power-up Rune will spawn randomly at one of two points in the river.

Roshan is an exceptionally strong creep located at the western end of the river. If killed, Roshan will grant gold to the entire team as well as drop the

Aegis of the Immortal, which will automatically resurrect the holder upon death. Later in the game, Roshan also drops a

Cheese after killed the second time and onward, which will greatly restore a hero's health and mana when used. Roshan also drops a

Aghanim's Shard - Roshan on his second death only. After the third kill, Roshan will drop an

The Jungle refers to the forested area between lanes. This is where neutral creeps can be found, which can be killed for gold and experience. It is possible to level up by killing creeps in the jungle instead of in the lanes. This practice is called Jungling.

Buildings are scattered throughout the map, and can be destroyed by the opposing side for gold and experience. To reach the Ancient, buildings must be destroyed in order from the outermost to the innermost. Buildings may be given temporary invulnerability with the Glyph of Fortification.

Players can teleport to any building with a

Each faction has defensive towers placed along the lanes leading to the Ancient. Towers deal single target damage to heroes and creeps. In the early stages of the game, a hero can only take a few hits from a tower before dying, so one must be careful as to not get too close to towers until they have gained enough strength. Towers have True Sight, and can detect invisible enemies.

Each base has three pairs of barracks, placed behind towers. One is for melee creeps, and one is for ranged creeps. If the barracks is destroyed, the opposing team's creeps will become stronger. If all 6 barracks are destroyed, all opposing creeps will gain an even larger power-up, which makes them very difficult to defend against. These mega creeps can usually assure victory because of their high health, damage and numbers, and can kill a Hero quickly if they are reckless enough.

Outposts are indestructible passive buildings that grant experience in a fixed time interval. Enemy heroes can right-click an Outpost in order to conquer it after at least one of their enemies tier two tower has fallen, denying experience to their enemies. The Outposts are located within the primary jungles of both teams, close to their safelanes between the tier 1 and tier 2 towers. Outposts grant vision and True Sight to the team they belong to, in an area around them.

Each base has 7 Effigy Buildings which can block enemy creeps before reaching the tier 4 towers or the Ancient. Five of the seven Effigy buildings are customizable with Effigy.

This is the main building in both bases. If one team destroys the other team's Ancient, the game is over and the destroying team has won. This building does not attack and will slowly regenerate health over time. It is defended by two towers and cannot be attacked until those towers are destroyed.

Four shops exist on the map, two for each side.

The Minimap is located at the corner of the Head-up display. It gives players an overhead view of the entire map, as well as the ability to issue certain commands. Constant awareness of the minimap is crucial to skilled gameplay. 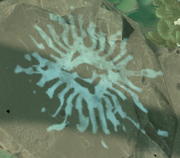 Vision defines which areas of the map is visible to the player's team. Areas that are not visible are covered by the Fog of War. Visions can be granted by allied heroes, units, and wards. Trees, walls, and higher terrain will obstruct vision.

There are six different height levels that have gameplay relevance:

One height level can be connected to another by a stair (passable) or a cliff (obstructed).

If an attack projectile is released, the uphill miss Evasion is calculated depending on where the two units are standing on the impact time.

▶️ They call me Tiny.
This article is a stub. As such, it is not complete.
You can help Dota 2 Wiki by expanding it.

Every time a player sends a move command, the pathing takes care of finding the fastest way possible. The path can be blocked by cliffs, Trees, Iron Branches, other units (also known as Body Block) and Traps.

Cliffs are the major component to limit the movement on the map. They can only be surpassed by Forced Movement, Blinks or Unobstructed Movement. Trees define the lane and jungle contours for the most part. They can be destroyed by various means and allow juking in the Fog of War. Body blocking is very important to keep the creep equilibrium at a favorable position in your Lane or to prevent an enemy from escaping until your allies catch up. Traps are mainly intended to cut off the route for chasing or escaping heroes, but they can be used for unconventional pulling methods as well.

▶️ Many hands make light work.
This article or section contains incomplete or outdated information. Please help the community by updating it.
You can help improve this article by updating the content as necessary. See the wiki style guide.

The Dota 2 map is ultimately derived from the Starcraft custom map Aeon of Strife, which also featured multiple lanes and a final objective to destroy. The map's current diagonal format was created for Defense of the Ancients, the Warcraft 3 custom map upon which Dota 2 is based.