The Dota Major Championships is a championship series announced by Valve in 2015 as part of their plans for improving the competitive Dota 2 landscape as a whole. 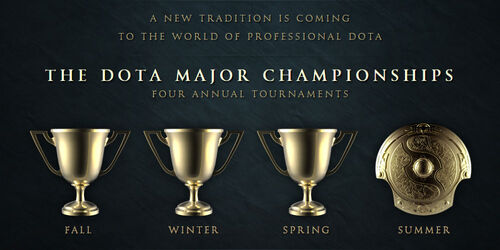 In April 2015, Valve announced their plans for improving the competitive Dota 2 landscape as a whole by hosting an annual series of four marquee tournaments for the 2015-2016 season.[1] The new Major Championship circuit incorporates the existing annual event, The International, as the Summer major in addition to new Autumn, Winter, and Spring majors named for their host cities. Valve-sponsored Major Tournaments are hosted by third-party organisers at different locations around the world, with the goal of increasing fan-team engagement as well as competitive and team roster stability during the year. The four tournament events, starting after the The International 2015 will be held annually during the Autumn, Winter and Spring culminating in the Summer event, The International 2016.

The first Valve-sponsored Dota Major Championship Event, The Frankfurt Major, was announced in September 2015. It featured a fixed prize pool of $3,000,000 and was hosted by ESL at Festhalle Messe in Frankfurt, Germany.

During The International 2016 it was revealed that the 2016/2017 season would comprise only three Major Championships, down from four in the previous season.[2]Additionally, the first two majors would use a shorter single elimination bracket format in lieu of the double elimination format that was a staple of The International and replicated for the Majors of the 2015-2016 season. The first Major of the season was held in Boston and retained the Eaglesong trophy from the first Autumn Major previously held in Frankfurt. Similarly, the Kiev Major held in April 2017 retained the "Winter" trophy from the Shanghai Major. The final major of the 2016/2017 season is The International 2017 again hosted in Seattle for the sixth consecutive year.

In July 2017 Valve announced significant changes to the Major Championship circuit.[3] Following The International 2017, Major Championships will be third-party tournaments chosen to receive a $500,000 USD sponsorship from Valve in addition to the events own prize pool. Eligible tournaments must have a minimum prize pool of $500,000 USD, at least one qualifier from each of the six primary regions (NA, SA, SEA, CN, EU, and CIS) and a LAN final.

Furthermore, Valve will also sponsor smaller events dubbed Minors. Similar in requirements, these Minor Championships must have a prize pool of at least $150,000 USD to be eligible for a $150,000 USD sponsorship. Valve will directly manage the schedule of Majors and Minors to help avoid collisions during the year.

Competing in Major and Minor Championships will award qualifying points to players which will be the sole criteria for invitations to The International 2018. Points will be awarded based on the total prize pool of a tournament, with Majors giving more points per prize pool dollar. The total points per tournament will also partially scale based on the time of year, with tournaments closer to The International awarding additional points. Only the top 3 point earners on a team will contribute towards a team’s effective total qualifying points. Finally, Valve will maintain leaderboards of player and team qualifying points for everyone to follow.

On August 1st, 2017, Valve released a preliminary tournament schedule for the 2017/2018 season consisting of 11 Major and 11 Minor Championships[4]. As of September 15th, there are 11 Majors and 16 Minors planned for the upcoming season.[5] The full list can be viewed on the Dota 2 Pro Circuit. Qualifying points from every tournament will be awarded proportional to their total prize pool, with Majors receiving a 1.5x multiplier bonus, i.e. an official Major tournament will award at least 1500 Qualifying points.

In order to qualify for Majors, professional teams must adhere to a set of rules that limit roster changes. This system was designed to create a stabler competitive scene by restricting frequent player trading. Detailed rules and team management can be found on the registration page.