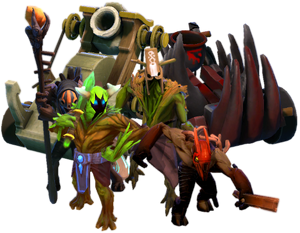 Like other creeps, lane creeps are vitally important to a hero's progress because they grant resources, allowing for an advantage over the enemy team. They give experience to nearby enemies when killed – as well as gold to heroes who deal the last hit they take. Allied creeps can also be denied by their team, preventing the enemy from getting their gold bounty, and halving the experience gain from them. To get as many last hits as possible, players often manipulate creep position in the lane by abusing their simple AI, gaining an advantage and disrupting the pace of the battle into their favor. Creep control techniques include disruptively pushing forward into towers, pulling neutral creeps for allied lane creeps to fight, or aggroing enemy melee creeps to change their target.

Backdoor Protection. However, once taken over by a player, a lane creep no longer disables the protection.

There are three types of lane creeps: Melee, Ranged and Siege. Melee creeps spawn in larger numbers and have more health and less attack damage than ranged creeps. Ranged creeps have lower health, but deal more damage per attack to creeps, and are able to attack from a distance. However, their attack type causes them to deal less damage against heroes and buildings. Siege creeps spawn in every tenth wave. They have high health and, unlike other lane creeps, have high magic resistance. They have a long ranged attack which deals significantly more damage against buildings. They also prioritize buildings over other units when in range.

Destroying either of the enemy team's melee or ranged barracks causes the destroying team's respective lane to begin spawning super creeps instead of regular creeps. Super creeps are stronger versions of regular lane creeps that give less gold and experience to the enemy when killed. When all enemy barracks are destroyed, mega creeps begin to spawn from all lanes and siege creeps gain additional damage.

Initially, a creep wave consists of 3 melee creeps and 1 ranged creep (and 1 siege creep every 10th wave). As the game progresses, their quantity gets upgraded:

After the 45th minute, a creep wave consists of 6 melee creeps and 2 ranged creeps (and 2 siege creeps every 10th wave), resulting in a total of 8 (10 with siege creeps) creeps per wave.

Lane creeps spawn close to the lanes' barracks. There is however some minor adjustment for each lane, so that they meet at certain points of each lane if they are not interrupted or distracted.

Every 7.5 minutes, melee and ranged creeps gain a permanent upgrade to their health and attack damage, as well as an increase to their bounties. The following bonuses are applied:

These health and damage upgrades are applied a maximum of 30 times, while the gold and experience bounty upgrades have no limit. This means their health and damage are fully upgraded at 225:00 in-game time, which is 3 hours and 45 minutes. The total values on each upgrade cycle can be seen in the following table.

Siege creeps only gain one upgrade, and that is +16 damage upon destroying their respective lane's ranged barracks.

Mega creeps do not grow stronger, but have their bounties increased over time.

When fully upgraded, super creeps are as exactly as strong as mega creeps, but this does not automatically make them mega creeps. All barracks must be destroyed to get mega creeps. But at this point, the only difference between super and mega creeps is their visual appearance.

When a lane creep gets denied by one of its allies, it grants 50% of its experience value to enemies. Enemies may only get full experience when the creep dies to them, or when a neutral creep kills it. Gold bounties are only granted to the enemy player who gets the last hit on the creep.

Lane creeps have a set path from which they do not deviate normally. The creeps walk down the lane aggressively, meaning they attack any enemy which comes within their acquisition range, similar to how player-controlled units act when giving them an attack-ground order. If a lane creep gets aggroed and the aggroing unit stays within the creep's acquisition range, it chases the aggroing unit until it is dead, or until it lost track of it, or until another enemy gets within range and draws the aggro off. If the aggroing enemy entered the fog of war, the lane creep walks up to the last spot it saw the enemy. If it then does not see the enemy again, it returns to the point at which it left the lane it belongs to. If the aggroing unit is outside of the lane creep's acquisition range, it chases the enemy for up to 2.3 seconds before returning to its lane. A creep which is no longer aggroed does not join other lanes even if they are closer. It returns to its own lane, even if it is the furthest away.

Aggroed lane creeps follow regular auto-attack rules, meaning they prioritize the closest enemies. So if a unit draws aggro and another unit is closer to them, the closer unit gets attacked, and not the unit which actually aggroed them. If multiple heroes are about equally close, the one which attacks them get prioritized, while the one which does not attack, or attacks an enemy from the opposing faction has second priority, and the one who attacks its own allies has least priority. For the creeps, it does not matter whether the attack actually happens or not, and it also does not matter how far away the target of the attack order is. The attack order alone is enough to aggro or de-aggro them, as long as the creeps are within acquisition range of the aggroing hero. This means issuing an attack command on allied heroes de-aggroes them, while issuing an attack command on enemy heroes aggroes them. However, this behavior has a cooldown of 3 seconds, means they can only be aggroed and de-aggroed this way every 3 seconds. Multiple non-hero units within about equal range have all the same priority, regardless of what they do. The creeps ignore units which attack them from further away, despite them being a bigger threat. They always prioritize closer units. Siege creeps always have a lower priority than heroes and other units, regardless of what they do. Buildings have a lower priority than siege creeps and wards have a lower priority than buildings, also regardless of what they do. If a lane creep attacks one of those 3 unit types, and another creep or hero gets within attack range, the lane creep switches to attack that enemy. Only enemy units within the lane creep's acquisition range are considered by this aggro system, which is 500 range for melee creeps, 600 range for ranged creeps and 800 range for siege creeps. It is possible to attack enemies without drawing aggro of nearby enemy lane creeps. This is doable by manually casting active attack modifier on enemies, referred to as orb walking, or by attacking the enemy while not within the creeps' acquisition range.

Siege creeps follow the same aggro system, except that buildings are their highest priority, and enemy siege creeps their second highest. This means if an enemy building is within the siege creep's attack range, the creep immediately switches away from its current target and starts attacking the building. The siege creep prioritizes attacking buildings over other buildings, so a tower is more likely to get attacked than, for example, an effigy building if both are within range.

If a lane creep is disarmed, it stops moving and stands still until the disarm expires. It completely ignores everything in this state. This prevents the creep from walking past towers if disarmed while at a tower.

Upon dying to a player-controlled unit, lane creeps are knocked up to 200 range away from the damage source, in an arc with up to 50 range upwards. The distance and height get higher, based on the damage instance that killed them (capped at 500), but are still randomised, so that equal damage instances do not result in always the same distances. The knockback duration ranges between 0.4 and 0.6 seconds. Damage below 100 does not cause a knockback. The knockback itself is mainly for aesthetic purposes, but might also affect some abilities. For example,

Leech Seed follows the corpse of the unit with their effects.

The knockback does not happen when the creeps are killed by units not controlled by any player.

The table only considers regular lane creeps, ignoring super creeps and mega creeps. Expand the list by clicking on the expand button at the very right.