Yurnero, the Juggernaut
No one has ever seen the face hidden beneath the mask of Yurnero the Juggernaut. It is only speculation that he even has one. For defying a corrupt lord, Yurnero was exiled from the ancient Isle of Masks--a punishment that saved his life. The isle soon after vanished beneath the waves in a night of vengeful magic. He alone remains to carry on the Isle's long Juggernaut tradition, one of ritual and swordplay. The last practitioner of the art, Yurnero's confidence and courage are the result of endless practice; his inventive bladework proves that he has never stopped challenging himself. Still, his motives are as unreadable as his expression. For a hero who has lost everything twice over, he fights as if victory is a foregone conclusion.

Yurnero is a highly disciplined swordsman, one of the Juggernauts, and the last surviving member of his kind. He hails from the Isle of Masks, a lost land that sunk into the sea. Stern and serious, Yurnero lives by his honor, and disdains the silly and mischievous.[1] Relying on the bladeform techniques of his homeland, Yurnero has vanquished many beasts, demons, and abominations,[2] and seeks endlessly to improve his craft. He wears a mask over his face at all times, perhaps out of ritualistic devotion to the Isle's gods.

The Isle of Masks is Yurnero's native land, ruled by numerous lords and home to various deities. Yurnero worships at least one of these gods, making pilgrimages to Temple of Masks to pay his respects and perform rituals to the Maker of Masks.[3] Steeped in tradition, the Isle of Masks is home to Juggernauts, who consider the ways of the sword an art of their people.[4]

Trained in the ways of the blade, Yurnero soon became an accomplished swordmaster, and received a katana named after the legendary Akakiryu to go with this distinction.[5] A collector of swords, he owns items of jade and stone, crafted by the Kuur-Ishiminari, and a rare blade forged by the ancient smith Sabasteen.[6] He also possesses an inscribed sword, holding a soul sealed within, as well as a risky, unguarded blade as testament to his skills.[7] Perhaps the most powerful weapon in his collection is a blade of The Lost Order, an ancient school whose techniques sliced through the fabric of reality itself.[8] Along with swordsmanship, Yurnero has mastered the island's healing arts, performing rituals around totems to mend wounds.[9]

Yurnero demonstrates his prowess by facing down great beasts, claiming their bones and tusks as honored trophies.[10] On the Ivory Isles, he slew thieves who stole its precious artifacts, and claimed a mask of Corodont ivory for himself.[11] Even unarmed, the Juggernaut is a force to be reckoned with, and once killed a mountain wolf with his bare hands.[12]

Bound by honor, Yurnero's personal ethics eventually caused him to defy a corrupt lord. For this, he was considered a traitor, and denied even a noble death.[13] Instead, he was cast out of the Isle to live as an exile, but not before receiving a prized hakama from his last swordmaster.[14] A special mask was also bestowed up on him, to signify his status as an outcast.[15]

Perhaps through premonition, Yurnero knew that after his exile, he would never set foot on the Isle of Masks again.[16] His prediction would come to pass. Not long after, he found himself the sole survivor of his people when the Isle was sunk through the work of terrible magic, killing his family. Despite this, Yurnero never grieves, preferring to replace sorrow with a personal quest for honor.[17][18] Vowing to continue the ways and traditions of his homeland, he still performs rites to the Faceless Ones, invoking the Visage of Vengeance in the process.[19] Although the Temple of Masks had been destroyed, Yurnero carries out its rituals as he had before, only now on the battlefield.[20] The sole remaining practioner of the Isle's unique martial arts, Yurnero's discipline never waivers as he continues to practice and hone his skills. As a ronin, Yurnero has been known to carry a second sword, slung over his shoulder, just in case his primary weapon is insufficient.[21] 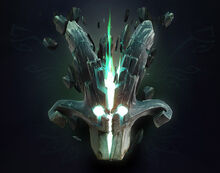 Juggernaut's mask after being cracked by the Adjudicator's Blade.

In an unspecified event, possibly a duel,[22] Sven cleaved Yurnero's mask in two with the Adjudicator's Blade,[23] cracking its top and awakening the ancestral souls that laid dormant inside it.[24] Among the spirits was an ancient dragon, who now accompanies Yurnero and contributes his powers to him.[25] Thus, the Juggernaut became a being merged from many souls. The dragon's might, combined with the strength of his ancestors, made him more powerful than ever before.[26] Yurnero and his dragon are grateful for Sven's actions, and feel they owe Sven a debt of gratitude.[27]

After the sundering, the Juggernaut and his dragon planned to restore what they have lost.[28] Once the Ancient is destroyed, they vowed to bring back their people and begin the rebirth of the Isle of Masks.[29][30]

Yurnero once had a romantic relationship with Lanaya, but the two broke up after he did something to upset her. Although Yurnero appears to have moved on, he still feels sadness.[31] Lanaya feels jilted and has not gotten over the breakup. She is quite angry at Yurnero, to the extent of threatening violence,[32] and attempting to make him jealous.[33]

Azwraith is an old friend of Yurnero's.[34] They both know Kanna, and Yurnero often asks Azwraith about rumors regarding Kanna's return.[35] Long ago, Yurnero also used to train with Xin, with interesting results.[36]

Finally, Yurnero is concerned about the rise of Sorla Khan, the violent and unreasonable new Oglodi leader of the Red Mist army. He wishes to discuss a solution to the problem with Axe.[37]