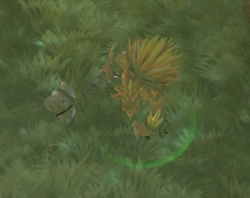 Invisibility is a status effect which makes units and heroes not appear on their opponent's screen or minimap, and makes them unable to be targeted directly by the enemy. Invisibility makes the unit's model appear transparent, but clearly visible still for allies. If it is an allied hero, its dot on the minimap also turns into a ring for the duration.

A unit can gain (usually temporarily, but not always) invisibility through certain abilities, items or from

Invisibility Rune. Some units, like most wards passively have permanent invisibility and do not need to acquire it through other sources. Generally, a unit keeps the gained invisibility until the duration runs out, or they perform an attack, cast an ability or item.

Most sources of invisibility have a Fade Time to turn the unit fully invisible. During this time, the unit is still visible, can still be targeted by attacks or abilities and they appear to be partially transparent. This period of time before the actual invisibility is applies is known as Fade Time.

The characteristics of Fade Time are:

Fade delay refers to the short delay before the actual invisibility is applied, but it has some significant differences with Fade Time.

The characteristics of Fade Delay are:

While invisible, a unit never automatically attacks any nearby enemy, not even when it is revealed by True Sight and being attacked. However, when issuing a ground-targeted order (A+

Generally, the invisibility is lost upon reaching the attack point. For

Ranged heroes, this is upon projectile launch.

As for casting abilities, the invisibility is lost upon reaching the cast point of the ability. This means that abilities with extended effects i.e.

Epicenter do not cancel the invisibility upon each beam or pulse. Channeling abilities do not cancel it either when going invisible after the channeling started.

The following units have permanently invisibility and are phased once they are created, learned, cast or spawned. 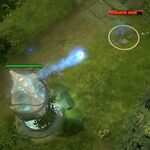 Riki revealed by the True Sight of a Tower

True Sight allows a unit to see and target invisible enemies that are in range. Some of the listed abilities provide True Sight only during certain situations.

Abilities which provide shared vision does not provide True Sight, as it merely just shares what that enemy unit actually sees to the player's team.

Exposing an enemy does not cancel out the effects of invisibility, although it does make their silhouette visible. An exposed invisible enemy has its location revealed, and can even be selected like a visible enemy, but is still almost fully treated as an invisible unit. This means it still cannot be targeted by attacks or single-targeted abilities, and still counts as invisible in terms of abilities affecting them, with a very few exceptions. Some sources of exposure also provide True Sight to fully reveal the enemy, but not all do. Exposing is a default component of shared vision. Therefore, it does not provide True Sight.

The effects of True Sight from Buildings is provided by an aura and its effect lingers for 0.5 seconds.

Invisibility interactions with other spells[edit]

Spells which choose specific or random targets on cast behave inconsistently with invisibility. This includes all bouncing spells (e.g.

Heat-Seeking Missile. The following such spells do not target invisible units:

Aghanim's Scepter. When upgraded, these spells can target secondary units, but ignore invisible ones.

talent. When upgraded, these spells can target secondary units, but ignore invisible ones.

3 These spells choose a new target if their current target dies. They do not choose invisible targets.

Soulbind does not bind the target to their invisible allies, but keeps the link up if an already bound unit turns invisible.

Mystic Flare is not created on invisible enemies. The area damage does affect invisible units.

The following spells have mixed interactions:

For most spells, it does not matter if the target turns invisible after the spell's effect already have begun. Their effects continue normally, regardless of the invisibility. There are exceptions to this.

Besides disjointed projectiles, the following spells behave differently when their targets turn invisible while they are active.