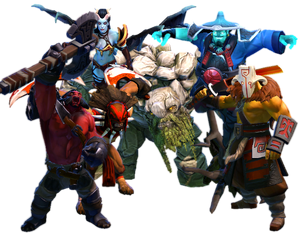 Heroes are the essential main characters of Dota 2, controlled by the players. Heroes possess the three attributes,

intelligence, from which one is their primary attribute. They capable of leveling up through the means of experience, up to level 30, gaining additional attribute points, and ability points which can be spent to level up abilities or gain even more attributes. Heroes are also able to spend gold to purchase items.

Like heroes, these clones do not disappear when dying (or expiring).

Wukong's Command is cast again. These hero clones are almost fully treated like regular heroes, with a few special interactions with some spells for fairness. However, since Meepo's clones and Arc Warden's clone work fundamentally differently (Meepo clones being permanent like heroes, and death to one means death to all, while Arc Warden's clone is rather similar to a summon or an illusion), each have different unique interactions. Monkey King's clones rather act like a spell effect and cannot be interacted with in any way. They stand at set locations and attack nearby enemy heroes automatically until the spell expires.

based on their level and their current killing streak, and scaling Experience

based on their level. Heroes also gain killing streaks upon killing heroes. A killing streak increases the hero's bounty, increasing its value for the enemy. A killing streak starts with 3 hero kills without any deaths in-between, and is capped at 10 kills. A streak longer than 10 has the same worth as a 10 killing streak. A hero's current streak is globally announced whenever it makes a kill.

to the killing hero.

A hero's death has a much bigger impact than the death of almost any other unit. When a hero dies, it stays dead for an amount of time based on its level and the player loses gold based on the player's

Dying to neutral creeps, or getting denied by an ally or oneself neither grants the enemy any bounty, nor ends the current killing streak.

After the first spawn, a hero does not spawn again. However, what heroes do instead is respawning. After a hero dies, it comes back to life after an amount of time based on its level. The maximum respawn time is reached on level 25.

Upon respawning, the hero gets instantly moved to the fountain area, with its health and mana reset. Cooldowns are unaffected and buffs and debuffs are not cleared upon respawning.

The hero also turns invulnerable and untargetable if there is an enemy hero within the base, which lasts until the respawning hero is issued a command, preventing spawn-camping. Commands include any regular unit orders like moving, attacking, casting abilities, as well as shop interactions like buying and selling items.

The buyback penalty is applied on top of the respawn time, unless affected by the aforementioned Reincarnation sources. Furthermore, dying to neutral creeps sets respawn time to a minimum of 26 seconds.

Ability
No Target
Affects
Self
While dead, the player has the option to buy their hero back into the match, spending money in order to instantly respawn at the fountain.
Base Gold Cost: 200
Networth Gold Divisor: 13
Next Respawn Time Increase: 25

Due to the high cooldown, high gold cost and heavy penalties, using buyback should be a thoroughly thought through action, as it can backfire and cause more harm than good. Scenarios where a buyback may be a good idea is when a crucial team fight starts while one is dead, in order to join the fight. Another crucial moment is when the base needs defending, or when having died during a team fight which your team still won and is going for a final push. Buyback should generally not be used to skip death timing to farm, as the gold cost is usually too big to make it ever worth it. Also, the death time penalty gets added on the next death. Especially on high levels, an early or ill-fated buyback can easily lead to a very long respawn time on the next death.

The BUYBACK button is only accessible while dead. It is located on the right side of the death bar. The death bar replaces the HP bar while the hero is dead and shows the respawn time. On its right, the Buyback button is located.

The button has 3 different statuses:

Right Click a hero's portrait above prints the respawn time if the hero is dead.

Every hero starts off at level 1 and can level up 29 times, up to level 30. Each new level grants the hero some

attribute points (different values for each hero). Ability points are gained up to level 25 which they can use to level up abilities or a

talent. Some abilities require the hero to be on certain levels to be learned or leveled up further. Most basic abilities have 4 ability levels and can be leveled on level 1, 3, 5 and 7.

Meepo, who requires different levels for his ultimate, and

Heroes level up through the means of experience, which is gained by killing enemy units, or by being within proximity of an enemy unit while an ally kills that enemy unit. The required distance to gain experience is 1500 if the kill is not done by the hero, or if the killed unit was not a hero. Killing other heroes always grants experience, regardless of distance. When multiple heroes are within range of an enemy unit which gets killed, the experience gets evenly split among the heroes. This includes every single clone of

A ▶️ level up is indicated by a visual effect, an angled yellow light beam from the sky shining on the hero. This light beam is visible to everyone. A sound effect is also played, which is only audible to the player.

Just like any other unit type, the hero unit type causes several different interactions with abilities. Some abilities cannot affect heroes at all, while others have altered effects or different values when used on heroes.

The following abilities cannot be cast on, or cannot affect heroes:

On the other side, these abilities can only target or affect heroes: