Grimstroke
Graceful, sophisticated, cunning and cruel, Grimstroke channels vile forces through the profane ink of his runebinding brush. Groomed from a young age to become a guardian of his people, Grimstroke's path to power was instead built upon a sacrifice he was all too willing to make: the lives of his entire race. Consumed by the very magic that was meant to protect them, Grimstroke's kindred now exist only as inky revenants, bound forever to his brush—their anguished screams and viscous forms apparent in the strokes of each dark mural he creates.

The people of Ashkavor crowded around the temple square, eager to witness the ascension of their new guardian -- to stand near the man as he bound their souls to his own. But as his final brush strikes fell against the runestone, and the bond of a new Ascended One was forged, everyone -- even those who'd stayed in their homes -- could sense that something had gone terribly wrong.

He knew the cause instantly. The droplets of ichor he'd procured to amplify the potency of his inkpots had instead contaminated them, and the power of the binding spell he'd cast now threatened to consume him. An inky corruption snaked upward from the runestone, along the handle of his brush, soon overtaking his hands. From there it spread quickly. Once it overcame his face and his mouth, he couldn't have screamed even if he'd wanted to.

All of his life he'd calculated on how to attain ever greater powers than the limits presented by his teachers would allow--going on far as to break the sacred prohibition against augmenting the inks. Indeed, with the wellspring of the Ascended bond open to him, he felt a measure of power coursing into his soul like he'd never imagined. His greatest triumph was upon him, if he could only survive it.

He drew deep from the power of the bond, pushing back against the corrupted ink flow. A great moan filled the air -- the collective cry of his people. Some swayed on their feet. The weakest collapsed. Many tried to run. And still deeper he pulled from their bloodline reservoir. But it wasn't enough to stop the ink tide.

It was only when the breath trapped in his lungs began to fail him, and the inkpool darkness fully encased him, that he saw his way out. The bond he'd made with the Ashkavoran people -- his people -- meant to be drawn upon only in service of their protection... it flowed two ways.

With the final surge of strength -- this time directed by more than just blind repulsion -- he pushed the ink torrent into the bond itself.

Slowly, he felt the tide retreat.. and heard the awful wails of his people as the corruption in turn rolled over them. When at last the ink relented, his eyes opened upon a world changed. The Ashkavoran people as he knew them were gone. Every last soul was transformed into terrifying shades of their former selves -- comprised no longer of blood and bone, only viscid, tainted ink.

Grimstroke is an Ashkavorian, the last of the Ascended Ones. Devious and haughty by nature, he is shadowed by the dark remnants of his former kin, twisted and transformed by his own lust for power. Trained from birth to be his people's protector, Grimstroke's personal ambitions instead led him to corrupt his own Ascension, creating a being shrouded by malevolent ink. With grandiose designs in mind, he sets out with his great brush to redesign the world as he sees fit.[1] Grimstroke is cunning and calculating in his plans, and he alone holds back the ink tide from consuming more than it already has.

As a child, Grimstroke was destined to become a guardian of his people, a task for which he was prepared by his sagely teachers. Like others before him, he would one day be Ascended, binding his soul to all other Ashkavorians, thus forming a protective link.[2] His mentors taught him the limits of this bond, and forbade any augmentation of the ritual, not realizing their pupil's dark ambitions until it was too late.[3] Brought up in the rarefied environment of high arts and sophistication, Grimstroke took on an elitist attitude, showing much disdain for those of lower class.[4][5]

Grimstroke during his Ascension, covered by corrupted ink

On the day of his Ascension, Grimstroke entered the temple at the center of Ashkavor, and dipped his brush in the sacred inkpots, which he had contaminated beforehand with drops of strange ichor. As he set his brush to the temple's runestone, the corrupted ink took hold of him. At first, he resisted the ink using the new bonds he had forged with his fellow Ashkavorians, but even their combined strength was insufficient. As the ink engulfed his body, he decided to channel its darkness into the bonds instead, instantly corrupting the other Ashkavorians, turning them into beings of shade.[6]

Having annihilated his own people, Grimstroke fled the temple.

After the Ascension ritual, Grimstroke attempted to return to Ashkavor, but found himself driven away by the shadowy revenants that used to be his kin.[7] Eventually, he gained mastery over his newfound powers, and made his way back to the temple grounds, where it had stood lifeless and unchanged since he'd left it.[8] Upon his return, he took possession of an ancient brush, imbued with the magic of his ancestors' bloodlines.[9] The revenants howled at his arrival, but he took control over them, using their collective bond to corrupt more victims.[10]

The remnants of the Ashkavorians maintain a level of autonomy, however. They seek death for themselves, or failing that, to drag Grimstroke into the afterlife with them.[11][12]

But not all Ashkavorians were corrupted by Grimstroke's hand, the Ascended Ones remain, and hope to restore their people once more.[13] However, their powers were greatly warped by the ink tide, and they barely survive.[14] Grimstroke endeavors to corrupt the Ascended Ones as well, bringing them under his control with the power of the Ancients, thereby completing his bond with all Ashkavorians.[15] In search of more victims, the same binding rituals once meant to protect his people were twisted towards more nefarious uses.[16]

Grimstroke's reasoning for his actions is not fully known, but he contends that his people brought their fate upon themselves.[17] 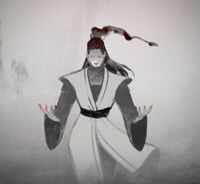 Yaovhi, Grimstroke's lover, before her transformation

Prior to his Ascension, Grimstroke fell in love with Yaovhi, an Ashkavorian woman whom he treasured deeply. She, too was consumed by the ink tide, and transformed into a dark phantom who now serves at his side, haunting and tearing at his foes.[18] While Grimstroke feels no sorrow for the destruction of his people, he still remininsces about Yaovhi, but tries not to dwell on the unchangeable past.[19][20]

Trained in the ways of the brush from a young age, Grimstroke has grown to admire the arts, commenting on works literary and visual.[21] He is open to collaboration with other creators, and takes the time to peruse their collections.[22] In addition, he also has an interest in sculptures and antiquities.[23] He looks down on dance, refusing to consider it a form of art.[24]

Grimstroke's love for secrets is personal, and is possibly one of the reasons he corrupted his Ascension ritual in the first place. He is never shy in asking other shady characters about the secrets they may be hoarding, or may have heard on the winds of rumor.[25]

One of Grimstroke's teachers falling to the ink tide. Xin and an unknown figure is seen in the background.

True to his blackened persona, Grimstroke finds much to admire in similarly sinister figures like Rotund'jere, Shadow Demon or Balanar, whom he considers a "beautiful creature".[26][27][28] Surprisingly, he cares little for the Dead God, and despises the Dead God's unending Dirge.[29]

Upon meeting Sylla, he states that he's met another druid before, although whom this refers to is unknown.[30]

Grimstroke has a particular hatred for the three spirit brothers: Xin, Kaolin, and Raijin, so much so that he finds their mere existence to be offensive.[31] The reason for this hatred is not clear, but it appears the spirits were involved in some calamity of Ashkavor's past, possibly leading Grimstroke to pursue greater powers in the first place.[32] He accuses Kaolin of being a puppet for some unknown master,[33] Xin of stealing his flame from the Burning Celestial,[34] and Raijin of wearing Thunderkeg like a "skin suit". [35]