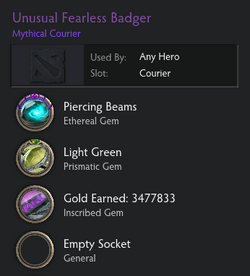 An item with an Ethereal Gem, Prismatic Gem, Inscribed Gem, and an empty socket.

Gems are items that can be placed into sockets to alter or enhance a cosmetic item.

Gems can be acquired by: 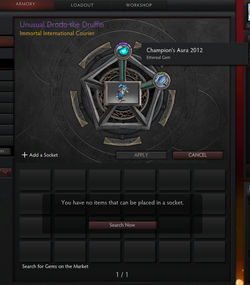 The socketing screen. This Unusual courier is socketed with an Ethereal Gem and a Prismatic Gem.

Gems can be placed in cosmetic items that have sockets. Most items can have a maximum of five sockets. Sockets can be viewed and modified inside the Armory by right-clicking an item.

Gem Packs are bundles that were given out on November 14, 2013 to replace Strange Modifiers and Unusual Paints. They contain a gem with the corresponding effect, as well as an Artificer's Chisel to create a socket.

Gems will change the Quality of an item. In the event of a conflict with an item's existing quality, a priority is followed. Higher priority qualities take precedence.