Frostivus 2018 was a winter Frostivus event that ran from December 19th, 2018 to January 7th, 2019. It featured the Frosthaven game mode, which is a co-op survival mode, where the players fend off herds of enemies. The event was released in conjunction with 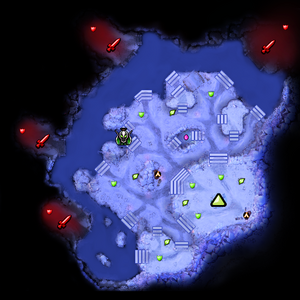 The Frostivus Tree ("Spirit of Frostivus"), located at the center of the base, is part of the objective of the game and must survive. It has 4500 health, 3 health regen, and 20 armor. It also provides True Sight in a 900 radius around it.

The three inner towers are slightly stronger than the 4 outer towers. All towers provide True Sight in a 900 radius, and grant allies in a 900 radius 2 armor.

The enemy spawn locations are guarded by towers as well, preventing the players from camping them.

Towers gain 9 armor after the end of every second round, resulting in the following values

Shrines have 1250 health, no regen, 10 armor, and no vision. Their active heal ability heals for 120 + 2/min health per second, and 40 + 1/min mana per second for 5 seconds, in a 500 radius. Has a cooldown of 180 seconds. When a shrine gets destroyed, it respawns at the end of the round with its ability on cooldown, regardless of its previous cooldown state.

Each round grants a set amount of experience to all players.

* Bags from Gingerberad Baby Roshans grant twice as much gold as bags from Frosty Friend Snowmen.

The following items cannot be bought in Frosthaven.

These items have been modified.

There are 4 different items that can be dropped by enemies, of which 3 are new. Dropped items last for 15 seconds on the ground before they despawn.

The most common drop are gold bags. Picking up a gold bag grants the entire team based on which round it is. A gold bag is automatically picked up when getting within 100 range of it. However, while spell immune, they have to be picked up manually by right-clicking on them.

Town Portal Scrolls, with a 1% drop chance. Unlike the other 3 drops, the scrolls can only be picked up by directly right-clicking them. They also land in the inventory, instead of being instantly activated.

The final enemy in each round may also drop one of the four exclusive consumable ability items at a 10% drop chance, which increases by 0.5% each round. 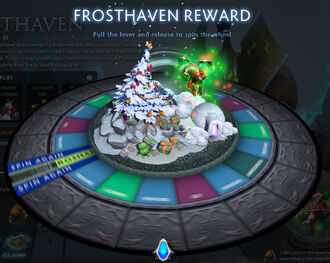 Swept up in the zeal of unraveling and reshaping arcane energies, Grand Magus Rubick marches a mob into Frosthaven, intent on uprooting the original Frostivus tree to explore the mysterious font of power beneath it. To stop the misguided magus, five heroes must rise to the defense of the ancient tree—and fight to keep the Spirit of Frostivus alive!