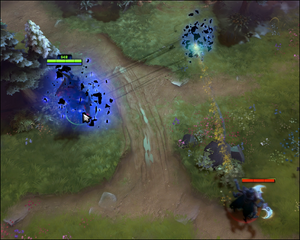 Disjointing is the act of dodging projectiles, or rather, to cause a projectile to fully lose track of its target. A disjoint is recognized when a projectile stops tracking a moving unit. Causing a projectile to run out (expire) before hitting the target does not count as disjointing in that sense, but rather avoiding the projectile by "outrunning" it.

Disjointing itself is not granted explicitly by any effects or spells, it is instead granted as a secondary effect to other abilities.

The most common forms of disjointing are blinking and becoming invisible. Although invulnerability and hiding causes projectiles to not affect the target, they do not disjoint, since the projectile still homes and technically hits the target. Not all projectiles can be disjointed, and not all types of repositioning abilities can disjoint.

These abilities disjoint projectiles once upon cast. The disjointing is not connected to the Forced Movement of some of the listed spells, but rather to the spells themselves. Other spells that use Forced Movement do not disjoint.

Phoenix and the allied hero put inside (when upgraded).

All true blinks disjoint, but not all teleporting spells do. The distance of the blink or teleport does not matter. The spells disjoint once upon getting moved by them.

Phantom Lancer and all gathered illusions.

The following teleport abilities do not disjoint projectiles:

The following abilities disjoint projectiles if no True Sight is present:

1 Cannot be revealed with True Sight, so disjoints projectiles even while affected by True Sight.

Becoming invulnerable does not disjoint projectiles, but rather reduces or eliminates the effects upon impact. Attack damage as well as spell damage are ignored. There are a few spells that affect invulnerable units.

All physical attack projectiles of each unit and hero can be disjointed. This includes all attack modifiers (e.g.

Disjointing the bounces from

Death Ward does not stop the projectile from continuing to bounce. They also can immediately jump on the disjointing unit again (when not disjointed with invisibility and still within bounce range), since it is not considered as a hit and thus still a valid target for the bounces. A disjointed bounce still counts towards their bounce count.

The projectiles of the following abilities are disjointable:

Mist Coil and Ether Blast can also be disjointed by targeted allies.

Shuriken Toss and an

Dragon Tail itself is instant, while in

Elder Dragon Form it uses a projectile which can be disjointed.

4 Disjointing projectiles which apply an area effect also prevents them from applying their area effect.

Assassinate provides True Sight over the target as Sniper begins casting, which lasts for 4 seconds, until the projectile lands, or the cast gets canceled. So it usually cannot be disjointed with invisibility, except with

6 The secondary projectiles of

Splinter Blast can be disjointed. However, the initial projectile cannot.

7 Applies a modifier to the heroes normal attack and can thus be disjointed like a regular attack.

The following abilities are not disjointable, which means that attempting to disjoint those abilities does not cause their projectiles to lose track of the target. When their target turns invisible, they are still fully affected.

1 Cannot be disjointed by its targets. Can be disjointed when returning to Grimstroke, resulting in the cooldown not being reset.

Huskar acts as a projectile. Though he cannot be disjointed, the spell gets immediately canceled when the distance between Huskar and the target gets greater than 1450.

Mystic Snake does not affect the target when it turns invisible before hit.

Tossed unit can be avoided by blinking or moving rapidly, but cannot technically be disjointed. In order to avoid the tossed unit, upon cast of Toss, the minimum required distance to avoid it is 4000, decreasing by 307.69 for each 0.1 seconds of Toss' duration.

Snowball can be avoided by moving far enough, since it travels for a maximum of 3 seconds.