Diretide 2020 was a Halloween event that ran from October 29, 2020 to December 22, 2020. It featured a special game mode where two teams must collect the most taffy while avoiding the wrath of Roshan. Players could earn many unique event cosmetics by playing matches and earning Diretide Points. 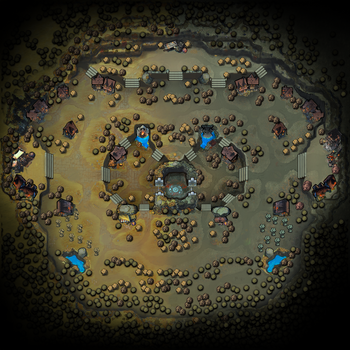 In the Woods... It Awakens.

The slivers of the Mad Moon hang low in the night sky. From spring comes summer, from summer comes fall; the shift of the seasons march onward, droned out by the unceasing clash of Radiant and Dire. Long forgotten are the brief moments in which we stopped to turn our attention towards the woods. Where is the season of Diretide? We howled at the woods, begging it to bring forth its candy-mad beast. But nothing came. And we moved on.

But now the trees shake. The taffy in our bowls jostles as the ground shakes under foot. Could it be?

Brace yourself for a special Dota 2 event. Roshan stomps from his cave, lumbering down the river, hungry for candy and blood. Round after round of an an all-new frenetic, five-on-five game-mode awaits. Lo, the season returns. It’s Diretide.