Valora, the Dawnbreaker, is a melee strength hero that shines in the heart of battle, happily crushing enemies with her celestial hammer and using the energy released to heal nearby allies. At one with the mass of her weapon, she revels in hurling her hammer through multiple foes and then converging with it in a blazing wake. Created to rival ancient forces of chaos and darkness by descendants of the first light, Dawnbreaker only taps her true cosmic power to fly to the aid of her teammates — eager to rout her enemies on the battlefield no matter where they may be.

Valora, the Dawnbreaker
▶️ "Darkness fears the break of dawn!"
Lore:
In the aeons after the Keeper's exodus birthed the age of light, some amongst the first sun's lineage began to align against the chaos their ancestor's maker left chasing in his wake. Calling themselves the Children of Light, they saw no one else as worthy of taking up the Keeper's abandoned mantle, and they yearned to beat back the onslaught of darkness, creating glorious armies built to purge the cosmos of all creatures of primordial night.

Valora, the Dawnbreaker, most prized warrior amongst the Children's ancient creations, is the shining herald of the majesty of order and light. Molded from the heart of a young metallic star, and charged by golden breath with new life, Valora was called to spread the glow of the Children's wisdom to the darkest reaches of the universe — setting fire to the heavens with each swing of her celestial hammer amidst an endless battle to keep chaos at bay.

In time, the Children also revealed another purpose for the Dawnbreaker. They had discovered a means of permeating the entirety of the cosmos with their inner light — to obliterate all aspects of darkness forever — and they sent Valora to seize a source of great power, the final piece of their ultimate plan. But for the first time, Valora and her hammer met with failure, and the price she and her masters paid was vast. The Children of Light's spark was utterly extinguished, and the Dawnbreaker was left adrift in a black expanse, lost for untold millennia before crashing on an unfamiliar world.

There she rested, dormant, until the presence of a wandering young star gave fuel to an ancient energy forge — a relic of the Children's that, like her, lay buried for countless ages beneath a blowing red waste. Now, with a small measure of her former powers restored by the forge, Valora wakes to a land beset by war and the unrelenting forces of chaos. She knows her gods may be gone, but the heft of the Dawnbreaker's hammer remains — matched only by her will to wield it justly in the name of goodness and light.
Voice:
Alejandra Reynoso (Responses) 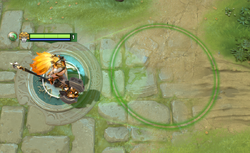 Being rooted at any time during the ability instantly cancels the ability.
Modifiers

modifier_starbreaker_fire_wreath_caster: Dispellable with death only.

modifier_starbreaker_fire_wreath_slow: Dispellable with any dispel.

modifier_stunned: Dispellable with strong dispels.
Across the vast lineage of star progeny, there were multitudes unwilling to align with the aims of the Children of Light. To those who dared organize defiance, the Children would dispatch Valora and her hammer to show a measure of their power--to leave the rebels either shattered or set back to rights.

Ability
Target Point
Affects
Enemies
Damage
Magical
Dawnbreaker hurls her weapon at a target, damaging enemies struck along the way. The hammer pauses for 2 seconds at the destination before flying back to her, leaving a trail of fire that slows enemies. Dawnbreaker can recall the hammer at any time, pulling her towards it so they meet in the middle.
Cast Animation: 0.25+0.77
Cast Range: Global
Max Distance: 1000/1100/1200/1300 (

modifier_dawnbreaker_celestial_hammer_caster: Dispellable with death only.

modifier_dawnbreaker_converge: Undispellable. Persists death.
The Brightmaul is Valora's oldest companion and sole remaining connection to the glow of her creators.

Ability
No Target
Affects
Self
Dawnbreaker recalls her hammer, pulling them together so they meet in the middle.
Cast Animation: 0+0

modifier_dawnbreaker_celestial_hammer_movement: Dispellable with death only.

Ability
Passive
Affects
Enemies / Allies
After 3 attacks, Dawnbreaker powers up, charging her next attack with a critical hit that heals all allied heroes within 650 units around her for a portion of attack damage dealt. Creeps and neutral enemies provide less healing. Allies are healed for 35% of the amount.
Required Hits: 4
Healing Radius: 650
Critical Damage: 120%/140%/160%/180% (

Prevents gaining stacks. If having 3 stacks, does not prevent the next attack from critting and resetting the stack, but does prevent the healing.
Modifiers

modifier_dawnbreaker_luminosity_attack_buff: Dispellable with death only.
Diminished in power without access to the Children's replenishing light, Valora can still recharge herself and her allies by creating order from the chaos which resides within each fight. 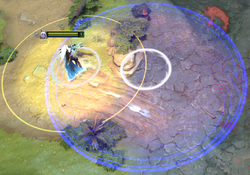 modifier_dawnbreaker_solar_guardian_disable: Dispellable with death only.

modifier_dawnbreaker_solar_guardian_after_land: Dispellable with death only.

modifier_stunned: Dispellable with strong dispels.
Only in defense of an ally will Valora relent to call upon the last reserves of her old powers that still allow cosmic flight.