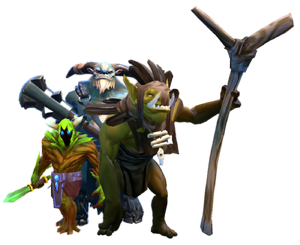 Creeps are basic units in Dota 2. Every unit which is not a hero, building, ward or courier is considered a creep. Creeps can belong to either faction, be neutral, or be player-controlled units. Unlike heroes, creeps do not gain experience and cannot level up. All of their stats are set values (though can still be altered by modifiers). Most creeps grant a set gold and experience bounty to heroes when killed.

Neutral creeps are a type of creep that are not controlled by any player. They are aligned to neither of the teams, and offer an alternative source of gold and experience. Neutral creeps appear in small camps scattered in the jungle on both sides of the map. They come with different power levels and most of them have unique abilities.

Roshan, who sits in his den at the river, is also considered a neutral creep.