The following hull sizes exist, corresponding to the following collision sizes (from largest to smallest): 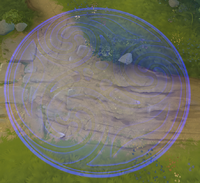 Collision size affects the size of an area of effect, if an ability is cast as a ground-targeted ability, the affected target's collision size is also considered as a buffer range for ability, and therefore increasing the ability's maximum area of effect range.

However, if an ability is cast centered on the caster (with ↓↓ Double-tapping), the caster's collision size is ignored and no buffer range is added.

The maximum area of effect for area-targeted abilities is defined as:

With aoeb being the base effect radius and colt the target's collision size.

Example 1
What is the maximum area of effect range if

Abilities Based on Collision Size

Phased is a status that allows units to pass through other units, ignoring collision size. Phased units can freely walk through any other unit, including wards, but excluding buildings and trees. Other units can also walk through a stationary phased unit as if it is not there.

There are two different kinds of phased movement, pathing through units, and the rare kind which allows the unit to walk through anything, including buildings, cliffs and trees, which is more commonly referred to as unobstructed movement.

Flying movement is similar to phased movement, with only very small differences, one being that flying units hover a certain distance above the ground.

These abilities provide phased movement which allows moving through units:

1 Shadow Fiend becomes phased during the cast time of

talent.
4 Illusions created by these abilities have unobstructed pathing.

The following abilities grants tree-walking, a buff that allows unobstructed movement through trees.

The following units are permanently phased:

Abilities that turn the caster into a flying unit

Trees are a prominent terrain feature in Dota 2. They make up a large amount of the map, and are very prominent in the forests that separate the lanes and border the map. Trees block vision and are normally impassable.

Despite the varying appearance and apparent size of the various trees, all permanent trees have an identical collision size of a 128x128 unit square.

Tango has an amplified effect when used on a planted tree.