Rattletrap, the Clockwerk, is a melee strength hero known as being one of the most well-rounded initiator-gankers in the game. Rattletrap's wide array of disables and nukes allows him to cause chaos among the enemy team and break up their formation, giving his team a powerful advantage in any fight. Battery Assault allows Clockwerk to inflict repeated damage ticks and mini-stuns on nearby enemies, allowing him to constantly hinder any enemies he manages to get close to and single out. He can also disrupt enemy movement and pen in foes with his Power Cogs, which induces an electric shock to foes outside, stunning them while damaging them and burning their mana, and can render enemies caught inside helpless. His damage nuke, Rocket Flare, gives him global nuking power that also provides scouting vision for him and his team. Finally, his ultimate, Hookshot, allows Rattletrap to instantaneously latch onto and stun a foe from long range, making him a very strong ganker. Few can escape Clockwerk once he has his sights locked in, and his machinations make him a powerful ally to have on any team.

Rattletrap, the Clockwerk
▶️ "I've a mind like a steel trap, and the physique to go with it!"
Lore:
Rattletrap descends from the same far-flung kindred as Sniper and Tinker, and like many of the Keen Folk, has offset his diminutive stature through the application of gadgetry and wit. The son of the son of a clockmaker, Rattletrap was many years apprenticed to that trade before war rode down from the mountains and swept the plains villages free of such innocent vocations. "Your new trade is battle," his dying father told him as the village of their ancestors lay in charred and smoking ruins.

It is a poor tradesman who blames his tools, and Rattletrap was never one to make excuses. After burying his father among the ruins of their village, he set about to transform himself into the greatest tool of warfare that any world had ever seen. He vowed to never again be caught unprepared, instead using his talents to assemble a suit of powered Clockwerk armor to make the knights of other lands look like tin cans by comparison. Now Rattletrap is alive with devices, a small but deadly warrior whose skills at ambush and destruction have risen to near-automated levels of efficiency. An artisan of death, his mechanizations make short work of the unwary, heralding a new dawn in this age of warfare. What time is it? It's Clockwerk time!
Voice:
Sam A. Mowry (Responses)

modifier_rattletrap_battery_assault: Dispellable with death only.

modifier_stunned: Dispellable with strong dispels.
Some of Rattletrap's contraptions don't quite work correctly, so detonating them proves useful as an offensive maneuver. 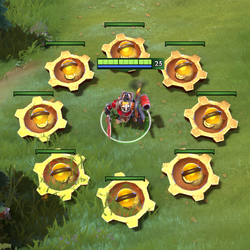 Ability
No Target
Affects
Enemies
Damage
Magical
Forms a barrier of energized cogs around Clockwerk, trapping any units that are near. Enemies outside the trap that touch a cog are knocked back, losing health and mana. Once a cog has delivered a shock, it will power down. Cogs can be destroyed by enemy attacks, but Clockwerk can destroy them with just one.
Cast Animation: 0.2+0.5
Cogs Spawn Radius: 215
Number of Cogs: 8
Attacks to Destroy: 2 (

Burns mana and attempts to damage if debuff was placed before spell immunity and when not dispelled.
Modifiers

modifier_rattletrap_cog_push: Dispellable with strong dispels.
One of Clockwerk's inventions of which he is most proud is the power cog - though it is sometimes despised by his allies.

modifier_truesight: Undispellable. Persists death.
What started as a festive display has become a useful scouting and bombardment tool.

modifier_rattletrap_overclocking: Dispellable with death only.

modifier_stunned: Dispellable with strong dispels.
Rattletrap understands the limitations of his armor. Just as he understands the risks of pushing past them in times of need.

Ability
No Target
Affects
Self
Rises up, granting Clockwerk flying vision, flying movement, and a 20% bonus movement speed. Clockwerk has a severely-limited turn rate during this time and cannot attack. Lasts up to 6 seconds or until he casts Hookshot.
Cast Animation: 0+0.53
Turn Rate in Degrees per Second: 75°
Move Speed Bonus: 20%
Duration: 6

modifier_rattletrap_jetpack: Dispellable with any dispel.

modifier_rattletrap_hookshot: Dispellable with death only.

Jetpack
Rises up, granting Clockwerk flying vision and movement, and a movement speed bonus for a short duration. Clockwerk has a severely-limited turn rate while flying, and cannot attack. Casting Hookshot ends Jetpack.

Cast time: 0
Turn rate in degrees per second: 75
Movement speed bonus: 15%
Duration: 6
Mana cost: 150
Cooldown: 25
Notes: Can only turn in big arcs while active. Items and basic abilities can be used while flying whithout ending it.