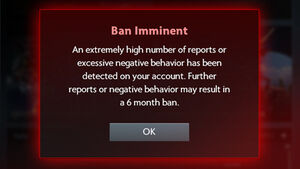 An in-game warning of an impending six-month ban

Bans are a form of punishment given out to players who violate certain regulations. The exact mechanics behind banning have not been disclosed by Valve, and are changed frequently to address community concerns regarding matchmaking. This page reflects what is currently known based on community experience.

Two types of in-game bans are administered. Players may receive one or both at the same time.

A Steam profile with recorded VAC ban. This record cannot be hidden.

This form of ban is performed under the Valve Anti-Cheat system (VAC). It suspends the user from the game entirely. During this time, Dota 2 will be inaccessible.

VAC bans are recorded on the user's Steam profile, and will be permanently visible to all other users. These bans will also remove players from the Leaderboards.

The following will not result in a VAC ban: