The Ascended Ones are chosen guardians of Ashkavor. Through a sacred ritual, they establish a bond between themselves and all Ashkavorians, drawing immense powers from their collective souls to protect Ashkavor. 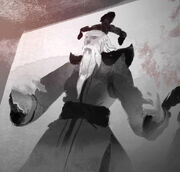 Youths are trained from a young age to assume the mantle of the Ascended, which is achieved through the completion of a sacred ritual. Their teachers place a strict limit on augmenting the effects of the ritual, out of precaution of endangering the Ashkavorian populace. On the day of Ascension, the initiate is taken to the city center, where a great runestone lies within the central temple. Here, the initiate performs a binding spell, painting the runestone with a great brush, dipped in magical inkpots. This way, the newly Ascended form a link with all other Ashkavorians, linking his people's souls to his own in a great bond shared by other Ascended Ones.[1][2] 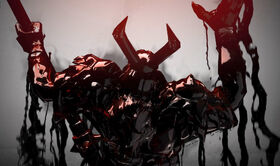 Grimstroke is overwhelmed by corrupt ink during his Ascension

Grimstroke, a cunning and ambitious Ashkavorian, was the last of the Ascended Ones. Thirsty for power, he ignored his teachers' warnings about amplifying the ritual's magic, secretly mixing drops of mysterious ichor into his inkpots. On the day of his Ascension, he dipped his brush into the contaminated ink, and found himself engulfed by the black substance. The ink tide flowed up his brush, took over his body, and in his desperation, he pushed the substance into the newly forged bonds he had created with his kin. This act caused the corrupt ink to spread to all other Ashkavorians, tranforming them into shadowy remnants of their former selves.[3]

Only the Ascended Ones before him managed to barely survive the ink tide, though their powers were greatly warped by the corruption.[4] Grimstroke seeks to use the Ancients power against them, so that all Ashkavorians will be brought until his total control.[5] For this reason, the remaining Ascended Ones hide from Grimstroke, hoping to one day restore their people.[6]

Lanaya has met other Ascended Ones before Grimstroke.[7]