) is a stat that reduces (or increases, if negative) physical damage a unit takes from spells and attacks. Every unit is capable of gaining or losing armor, and most units start with a small amount of base armor, some even starting with negative armor. A hero's armor can be passively increased with

agility via leveling up, certain items,

agility increases a hero's armor by 0.167 or

Total armor is defined as

With R being the Total Armor, RB the Base Armor, RnegMu the Armor Negating Multiplier and RBonus the Bonus Armor (Flat armor values other than

Base armor is the part of the main armor that never changes throughout a game. It consists of one fixed value set for each unit individually. The base armor of a unit can be a negative number. Since only heroes have agility, the HUD of all non-hero units shows their base armor.

Main armor is the armor value shown in white numbers near the shield icon in the HUD, consisting of base armor and the armor granted by a hero's agility. The only way to improve a hero's main armor is to increase its

agility, which is gained by leveling up, acquiring certain items, or with the help of certain abilities.

The main armor is defined as

With RM being the Main Armor, RB being the Base Armor and RnegMu the Armor Negating Multiplier.

Bonus armor is the armor value shown in green numbers with a plus on the left, right below the white armor number on a unit's statistics. Whenever an armor granting item or armor increasing ability shows a +Value Armor, e.g.

Blade Mail +6 Armor, it increases the bonus armor of the affected unit.

Probably the most important difference between main and bonus armor is that illusions only benefit from main armor, although their HUD still shows the bonus armor just like on other heroes, to make them less obvious to the enemy.

A lot of abilities and items have abilities that grant or reduce armor.

These changes mostly affect bonus armor, and never added to the main armor, with

Some abilities negate or ignores a unit's armor by reducing or increasing armor based on the unit's armor, effectively removing a percentage of the armor on the target. This Armor negation only affects the armor value of units, their defense class is unaffected and still reduces damage normally.

The following abilities negate base armor:

Pure Damage is a damage type that is not reduced by Armor or Magic Resistance. It is also not amplified by magical damage amplification abilities, fully ignores Armor and Damage Block. It does not affect invulnerable units.

There are a few sources that can manipulate Pure Damage, with

Dispersion is one of them. Pure damage affects units with Spell Immunity (because spell immunity does not block damage), but that does not mean that an ability that deals pure damage is able to target spell immune units.

talent that grants them bonus armor.

Besides these, the following heroes have talents which increase the armor of the units they summon

Armor Corruption is granted by choosing a

Talent, that causes hero attacks to reduce armor of the attacked target.

Ability
Passive
Affects
Enemies
There is no description for this ability.
Armor Reduction: 3
Duration: 10
Modifiers

modifier_armor_corruption: Dispellable with any dispel.

talent that grants them Armor Corruption.

All units, including buildings, have an inherent base armor value and defense class. Any physical damage dealt to a unit is multiplied by the damage multiplier, resulting in either damage reduction or increase depending on the target's armor value.

Damage Multiplier is also used to calculate a unit's Effective HP (EHP). The lower the damage multiplier, the higher the Effective HP of a unit, vice versa.

For any real-valued armor, the damage multiplier is defined as

With DMu being the Damage Multiplier and R the armor value.

There are several different classes of armor defense (also known as armor type), which determine how much damage a unit takes against certain attack classes. Each of the 3 different defense classes (Hero, Basic, Structure) either reduces, increases or does not affect the damage from each of the attack classes, on top of armor values manipulating them.

Attack damage dealt against defense class is defined as

The following table shows how much damage each defense class reduces against each attack class, and the unit's defense class (units which take a set amount of damage per attack are excluded).

Siege Creep's Base Armor for this example is 5.

Sven) deals 50% less damage against the defense class "structure" (to the Siege Creep).

Therefore in this example,

Sven's 100 damage attack to the siege creep with 5 armor would be 38.4615. The same attack would deal 76.923 damage to a unit with any other defense class, since attack class hero deals full damage to them. 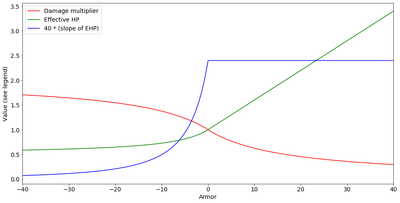 The total amount of physical damage a unit can take due to the armor it has is known as Effective HP (or EHP). 16.66 armor adds 100% to EHP. This means a unit with 1000 health and 16.66 armor can take 2000 physical damage. The formula adds 6% EHP per point of armor regardless of the previous armor value.

This definition of EHP assumes all damage taken is physical. EHP against magical damage (such as

Finger of Death) is modified by magic resistance.

Effective HP against physical damage is defined as

With CHP being the Current Health and DMu the Damage Manipulation.

Sven has a total health of 2176 and 12.5 points of armor without any items. What is his effective HP against physical damage?

Sven's effective HP against physical damage in this example is 3808.

Corrosive Haze, and his armor is now -7.5. What is his effective HP against physical damage?

Sven's effective HP against physical damage in this example is 1660.63.

This graph shows how much more additional damage a target takes when armor debuffs are applied, using the WC3 DotA armor formula.

Amplified damage from negative armor is calculated differently in WC3 DotA than in Dota 2.[1]

Negative armor in WC3 DotA has a cap of -20 armor (71% damage increase). Further reducing the armor does not change the damage increase.[2] Also, the more aggressive damage amplify formula is used resulting in a max damage increase of 71%.

The amplified damage is defined as

With R being the armor value.