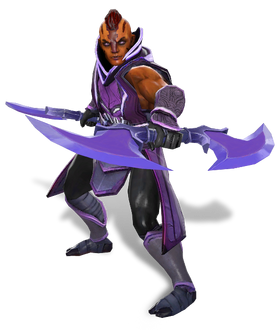 is one of the three primary attributes that grants attack speed and armor to every hero. Agility heroes also gain attack damage per point of agility.

For agility heroes, every point in agility also increases main attack damage by 1.

Because Agility heroes are the only class of heroes to gain both damage and attack speed as their primary attribute increases, they tend to have the highest physical damage output as the game progresses. This makes them scale very well with offensive items. They tend to have limited disabling capabilities or nukes; almost all their abilities augment their physical capabilities or serve as positioning or escape mechanisms. This tends to make them much more vulnerable and weak in the early game when strong offensive disables and nukes dictate the flow of kills, but also means that, with good items under their belts, they will be the ones delivering the greatest amount of damage in the late game, while also being dealt the least amount of physical damage as a result of their high armor. Agility heroes have a roughly even split between being melee or being ranged, and fit primarily into carry and ganker roles.

There are 38 agility heroes in Dota 2.

agility as their primary attribute. The growth columns indicate by how much the base values increases for each level of the hero.

These items grant heroes a passive agility bonus by having them merely equipped.