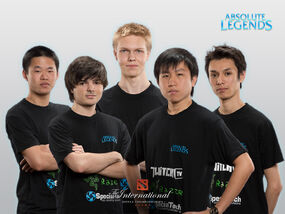 Shatan, Godot, bLeek, Musica, and Snoopy at The International 2012.

In January 2012, Absolute Legends decided to pick up Australian powerhouse and victor of the BenQ 'The Clash 2' tournament, Natural 9. After The International 2012, the team was dropped.

In October 2012, God departed from the team to join LGD.int and was replaced by s0ny.

In November 2012, Vigoss was dropped from the team and replaced by SexyBamboe.[2]

In December 2012, due to issues within the team, ComeWithMe and SexyBamboe both left.[3] Freezer and s0ny also departed from the team. Later that month, Absolute Legends picked up Icelandic squad Romy and the Rest as their academy team.

In June 2013, Absolute Legends and their main squad decided to part ways.[4]