Imunidade a magias (formerly known as magic immunity) is a modifier which prevents most spells to target the affected unit. This includes single-targeted spells, area spells, passive and active abilities.

Spell immunity may be the main part of a spell, but it also is used as an extra layer of protection by some abilities (usually combined with invulnerability). 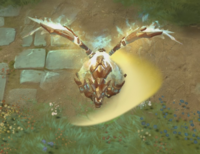 Spell immunity is a status effect (also known as modifier). Most spells in the game first check whether or not the unit has the spell immunity modifier on. If the modifier is present, single target spells cannot target the unit at all, while area of effect spells ignore the unit and already ongoing effects may stop affecting it. However, some spells (and most ultimates) pierce spell immunity and can fully target and affect spell immune units.

When a unit turns spell immune while a projectile from an ability is already flying towards it, the projectile has no effect upon impact if the spell it originates from does not pierce spell immunity. The same applies to most, but not all delayed effects.

Spell immunity does not prevent regular attacks of any units. However, some attack modifiers do get blocked, but not all of them. Generally, all critical strikes, cleaves and most bashes pierce spell immunity.

All sources of spell immunity also set the affected unit's magic resistance to 100%. This leads to the affected unit taking no magical damage at all, not even from spells which pierce spell immunity. Their damage technically still hits the unit, but gets reduced to 0. This means they may still proc on-damage effects, since some of them do react on 0 damage instances as well. It also means that abilities which ignore damage reduction (e.g.

Cota de Lâminas) still react on it as well and apply their full effect.

Since magic resistance only affects magical damage, the unit is still fully affected by physical and pure damage. If a piercing ability uses one of those damage types, it does damage the unit.

Most sources of spell immunity also dispel the target upon getting applied, removing all buffs or debuffs a basic dispel can remove. The dispel applied by spell immunities is slightly stronger than a basic dispel and can remove a couple of more status effects. However, not all of them apply a dispel. A list of dispellable effects can be found here.

Since dispels only remove buffs off of enemies and debuffs off of allies, it is possible for units to turn spell immune without losing any buffs or debuffs (doable with Omniknight's Erro Lua em Módulo:Ability_ID na linha 44: Could not find Cargo data for "Repel".). In this case, most buffs/debuffs still apply their effects normally. Only a few of them are inactive while the unit is spell immune. This means that a damage-over time spell may still damage the unit. If it is magical damage, it gets reduced to 0, which is enough to proc some on-damage effects.

These abilities grant spell immunity as a main part of the spell. They all apply a special form of dispel upon cast which removes a few more status effects than a regular dispel.

These abilities also apply spell immunity. However, they only grant spell immunity as an extra layer of protection on top of the invulnerability they grant. This means their spell immunity only matters for spells which can affect invulnerable units (e.g.

Lâmina Difusora can target invulnerable units, but not spell immune units). These abilities do not apply the special spell immunity dispel like the above sources. However, some of them still do dispel, independent from the spell immunity.

With a very few exceptions, most non-hero units gain their permanent spell immunity through a passive ability.

Every not-targeted spell, be it an area spell or a spell which affects self upon cast, pierces spell immunity for allies and self, with a very few exceptions listed below. All runes apply their effect on spell immune units.